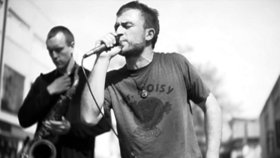 Music: Electronic / DJ, Reggae / Ska / Dub
Ben Stanford A.K.A. Dub FX is likely the most successful street performer of all time. His strength as a musician comes from his highly technical mind and his dedication to being independent and unique. DubFX creates intricate layered and textured songs, real time, using his own voice and multiple effects pedals including, most importantly, a looping station. He has remained independent throughout his entire career and currently tours the world with the Cade, Flower Ferry, and Snarephone among others.


“Street Wise (the Art of Looping)” with DUB FX will demonstrate the art of looping by way of beatboxing, vocals and tweaks. The audience will be guided on a journey through the love of loop, experiencing how moments of impromptu inspirations can play a key role in capturing the attention of potential lifetime fans. Also the session will cover some street promotion techniques and the use of a loop pedal to enhance both live and recorded music. The session will consist of a checklist format listing the tools and necessities needed to be a versatile street performer.

Dub FX (real name Benjamin Stanford) is a worldwide street performer and studio recording artist from St Kilda, Melbourne, Australia.[1] After playing and singing in a band called Twitch, he set out solo when he moved to Europe. His trademark is creating rich live music using only his own performance aided by Live looping and effect pedals combined... more info
Audio: Time Will Tell (feat. Mt.Woodnote & Flower Fairy)
Videos: