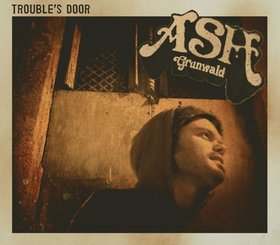 Music: Pop / Rock / Indie
When R L Burnside released the album Bothered Mind in 2004, teaming up with hip hop producer Lyrics Born, he showed the world that the blues were not just meant to mutate into ankle-twisting rock n roll. The sound of the twelve-bar blues emerged in Africa, as did the beats that would give rise to hip hop and when Burnside combined the two, hundreds of years from their point of origin, it would be a marriage of fate, a beautiful partnership that simply made sense. In Australia, at precisely the same moment, a gent of much younger persuasion surrounded naturally by the hip hop of his generation but as deeply embedded in the blues as those far beyond his years, made the very same discovery. What he proved with that parallel step all those years ago, was possession of a foresight generally gifted only to those many decades further along.

Ash Grunwald, put together his first album, Introducing, leaning heavily on traditional blues but it was his second album I Don’t Believe released in April of 2004, that would change his state of play. It was his first album - of many to come - to graft technology onto the deeply rooted foliage of the Delta swamp.

In 2008, after collaborating at a song writing workshop with producer Countbounce (Urthboy, TZU), he and Grunwald teamed up to deliver an album of thumping beats and grooves mixed in with blues jams. The result, Fish Out Of Water, was a genre defying record. Although Grunwald had regularly placed beats in his music, it was often simply a mash-up of DIY electronic beats with his blues tracks placed on top. “I wanted to smash the two together really hard, so that you couldn’t tell which side started it first,” Countbounce says. “More of a soul hip-hop approach. The drums would be sampled. And the feel of a hip-hop rhythm section with his guitars on top.”

Blistering live sets on the festival circuit throughout Australia, Japan, Canada,
America, Europe and the UK, have had critics and fans raving about his unique blend of roots, blues, beats and a whole lotta groove for now, more than a decade. Nominated five times for Australia’s ARIA Awards, and a swag of award wins including MBAS Blues Performer of the Year 2003 and the AIR Best Independent Blues and Roots Album, and in 2009, taking out a prestigious APRA songwriting award for Blues & Roots Song of the Year.

His album of 2010, Hot Mama Vibes, was nominated for Best Blues &
Roots album by both the Australian Record Industry Association and Australian Independent Record Label Association, and after a sold out national Australian tour, he capped off 2010 supporting Jack Johnson’s Australian tour. His first single from the album, ‘Walking’ received significant radio airplay, and was prominently featured in the Hollywood blockbuster, ‘Limitless’ starring Robert De Niro and Bradley Cooper.


His greatest achievement though has been the creation of his most internal album to date. Trouble’s Door, due out May 11, found life in the fiery breath of injustice; the frustration of severe political and environmental mismanagement ‘It's some of my most personal songwriting,’ Ash confesses. ‘I had just done a benefit gig to stop coal seam gas mining. There were other issues going on at the time, you can take your pick really, and it occurred to me that our system just doesn't work. We are experiencing the result of rampant unchecked capitalism.’

The music traverses many a tale as well; the blues propelled by driving dancefloor rhythms, buoyed by hip hop beats and slammed by the dubstep crunch. Naturally.

10 years since the release of that first blues record and hundreds of thousands of arses shaken since, Ash welcomes you as always to strive toward life’s greatest mission amongst the sadness and the challenges – the presence of good times and the possession of a happy heart. http://www.facebook.com/AshGrunwald || http://www.ashgrunwald.com