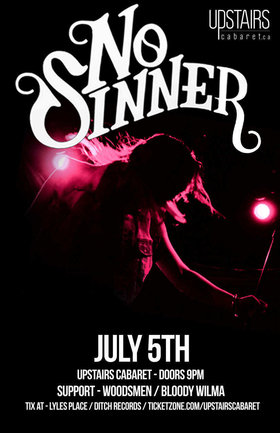 Tickets at: Lyle's Place | Ditch Records | http://tinyurl.com/kccegwm
(please note if you purchased a ticket for the may 19th show it is still valid.)

They came, tumbling and wailing, like the sound of windmills burning in the night. They came, like the slow rumble of high stepping, dirty stallions, sweating and champing in the darkness. They came—rhythm, blues, soul, and rock —rolling down Main Street, with all the vicious swagger of temptation and the undiluted pain of confession…

A few close calls and a whole lotta whiskey later, No Sinner is ready to release "Leadfoot". A brand new barnburner of a song that reflects the bombastic energy of their live shows, "Leadfoot" is about the power of partners in crime and how sometimes taking things to the edge is a need, not a choice. Fasten your seatbelts, it’s gonna be a wild ride. http://www.nosinner.com

In the days of yore, there was a legendary trifecta of mythic propensity for glory, wealth, strength, knowledge, and wisdom: a golden bard, clownin' minstrel, and nondescript troubadour who came from yon valleys over there. They died, and Woodsmen was born eventually. And they were never the same again. Or before, during, or even JUST before.

Five fresh-faced young lads and one lovely lady form the body of Woodsmen, a progressive indie pop monster that loves to sing the blues. With their experimental form of pop, the band appeals to both the casual radio listener and the musical savant. Since forming in 2011, the band has thrived under the incredibly supportive and music-friendly atmosphere of Victoria, BC, which has encouraged them to spread their wings and share their sound beyond their home of Vancouver Island.

Woodsmen’s writing process is truly collaborative and showcases a diverse range of sonic influences. Steady backbeats and melodic keyboard lines provided by Marek Olsen, Sol Kauffman, and Sean Kennedy combined with the trade off guitar riffs of Jake Gambling and Solomon Krause-Imlach lay groundwork for chanteuse Maryse Bernard’s jazz-trained and blues/RnB-influenced alto. The playful but definitive changes in timing and abrupt stops build tension throughout their songs, adding to the emotional peaks and valleys brought on by Bernard’s lyrics.

The band’s engaging stage presence combined with their earnest ambition and networking have found them homes in many of Victoria’s most popular venues, including Alix Goolden Hall, Lucky Bar, and Upstairs. They’ve had the immense pleasure of opening for Jon and Roy, Kytami, Carmanah, and The Zolas among others and recently played to a riotous crowd at their first off-island gig at Joe’s Apartment on Granville St. in Vancouver, BC.

Woodsmen were recently nominated for Song of the Year at the Vancouver Island Music Awards for their single “For Keeps”, and have recorded an upcoming EP with fellow VIMA nominee Sam Weber of Jets Overhead. Their next plans feature a tour of summer festivals and a focus on more songwriting with the goal of carefully-considered full-length.

No Sinnner is a new Vancouver, female, blues rock four-piece. Currently the band is playing gigs around BC and recording their debut EP, due for release this summer. more info

Woodsmen is a young 6-piece Victoria-based alternative rock band who's members have come together from Vancouver, Saskatchewan, Shawnigan, and Hawaii. After forming in September 2011, the band has steadily been picking up speed. Since ringing in the new year, they've already been interviewed on CFUV, as well as featured in the Victoria lifestyl... more info

bad bunny. more info
Submit info on this show to our admins