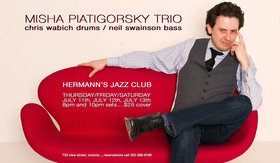 Music: Classical, Folk / Celtic / Latin / World, Jazz / Blues
Misha Piatigorsky is emerging as one of the most innovative musicians on the international music scene today. His unique marriage of powerful melodies with an unusual harmonic sensitivity gives his sound a deeply personal yet cosmopolitan dimension, reflecting his experience as a Russian-Jewish émigré growing up in urban America. The winner of the 2004 Thelonious Monk Composers Competition, his works were recently hailed as “beautifully merging of the worlds of serious jazz and pop” by the Boston Globe. His music can also be heard on the soundtracks of major motion pictures including Chaos Theory, Pretty Persuasion, Victory Over Darkness, RX, and Danika. Piatigorsky has also produced over thirty award-winning albums in various genres ranging from Hip-Hop and Jazz to Brazilian and Jewish Music, writing for a variety of ensembles ranging from intimate duos to string orchestra, choir, and big band.


Piatigorsky has been a highly sought-after pianist in New York City for almost two decades, regularly performing at prestigious venues including Dizzy’s Coca-Cola Club at Lincoln Center, Birdland, Iridium, Smoke, Blue Note, and Zinc Bar, collaborating with musicians including Mark Murphy, Wynton Marsalis, Jon Hendricks, Joe Lovano, Michael Brecker and John Faddis. He has toured extensively across Europe, North and South America, Australia and Japan, performing at venues such as the Montreux Jazz Festival, the North Sea Jazz Festival, the Perugia Jazz Festival, to name a few. Distinctions have come from the American Pianists Association, Rutgers University, the Manhattan School of Music, and the John Lennon Songwriter’s Competition. Renowned for his virtuosic flair onstage, Piatigorsky’s technique, charisma and electric energy have been described in the Jazz Review as combining “the chalice of modernism with the stew-pot of soul.”


Current projects include the Misha Piatigorsky Trio, with bassist Boris Kozlov and drummer Ari Hoenig, which regularly perform to critical acclaim throughout New York City, and Boogaloo Brasiliero, an original music project with a Latin-American vibe, together with guitarist Freddie Bryant. In February 2009, Piatigorsky toured thirteen philharmonic concert halls across Russia, featuring arrangements of his own music for two pianos.