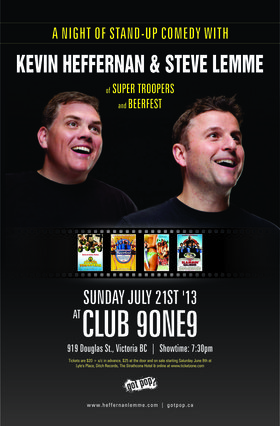 Kevin & Steve will also be performing at:
The Queens in Nanaimo BC - Monday July 22nd
FANCLUB in Vancouver BC - Tuesday July 23rd

KEVIN HEFFERNAN (“Farva” in Super Troopers and “Landfill” in Beerfest) & STEVE LEMME (“Mac” in Super Troopers and “Fink” in Beerfest) are 2 members of the Broken Lizard Comedy Group and creators of films such as Super Troopers, Beerfest, Club Dread & The Slammin’ Salmon. In their two man live show, Heffernan & Lemme perform stand up, tell funny stories about the making of their movies and sometimes even drink a beer with the audience -- Beerfest style! The show has it all from 2 of your favorite Broken Lizard members. In the end, you’re guaranteed to see everything that’s funny about a fat man sharing a stage with a little bitty fella.