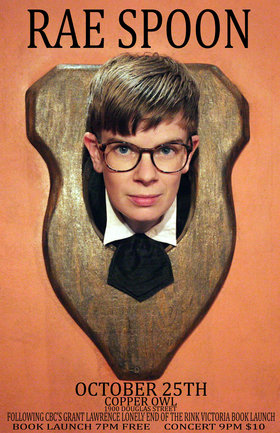 Music: Pop / Rock / Indie
RAE SPOON
http://www.raespoon.com/
With a voice as big as the prairie sky, transgender musician and author Rae Spoon has a story like no other. My Prairie Home, Rae Spoon’s latest album, explores the meaning of home when it is no longer a place one can return to.

As a young person, Rae used music both as an escape and as a place to build a world they could live in safely. Songs about death, coming out as queer during high school, and surviving abuse are all sung by a voice that can break a heart and fill it with hope at the same time. The album spans their early musical influences from folk and gospel to indie-rock and grunge. My Prairie Home features the score and soundtrack to the upcoming National Film Board documentary of the same name. Directed by Chelsea McMullan, this documentary musical about growing up and surviving in an evangelical Christian family is slated for release in Canada in Fall 2013.
Having started out as a country artist and later adding experimental and electronic elements into their music, Rae Spoon has released seven solo albums and three collaborative albums over the past ten years. They have toured extensively in Canada as well as internationally (Europe, the USA and Australia). Rae has been nominated for The Polaris Music Prize, CBC Radio 3 Bucky Awards, and the Galaxy Rising Star Award.