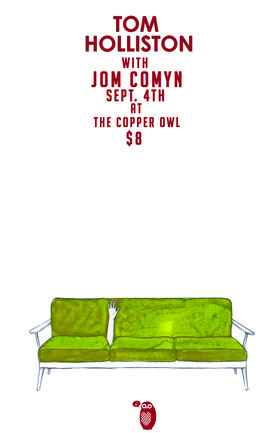 Tom spent his formative years as a druid in the interior of BC. Upon learning several instruments, including the mandolin, goat horn and cricket bat, Holliston moved to Victoria, BC, formed the Show Business Giants and became an international man of intrigue and noteriety. Eventually, NOmeansno begged for his services, having seen his twin brother, Tommy Hanson, perform with the Hanson Brothers.Holliston enjoyed several years as “the other guy” in NOmeansno, and began releasing solo albums in 2001. Many flattering photos can be found at http://www.nomeanswhatever.com.

JOM COMYN (Edmonton)
http://jomcomyn.bandcamp.com/
http://music.cbc.ca/#/bands/Jom-Comyn
With the restraining limits of compositional minimalism and his signature baritone voice, the initial self-released efforts of Jom Comyn have spanned different genres and approaches: downtempo singer/songwriter, pensive instrumentals, and gusting landscapes of noise--with a touch of jazz just for fun.

Singer/songwriter/guitarist; collaborator with NoMeansNo, the Hanson Brothers, the Show Business Giants. more info
Articles: Get Lucky with Tom Holliston!
Submit info on this show to our admins