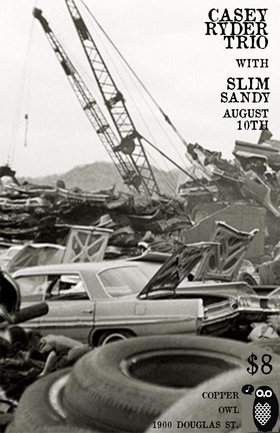 Music: Country / Bluegrass / Rockabilly, Folk / Celtic / Latin / World, Jazz / Blues
CASEY RYDER TRIO
http://www.carbonize.com/clients/casey/about.htm
Casey Ryder’s music defies categorization. The talented, multi-instrumentalist’s latest CD, the surprise-filled and wide-ranging Here showcases Ryder’s unique, versatile multiformity. He’s a musical vagabond whose idiosyncratic, original songs use a variety of styles from swampy rockabilly, to gypsy swing, to twisted, Brechtian ballads and beyond.
A fixture on Victoria’s music scene for almost two decades, Ryder has established a reputation for fun-filled, improvisational excellence in numerous bands and musical forms, most notably in his award-winning quartet, The Swingin’ Bachelors. Formed in 1998, The Bachelors played regularly at pubs, clubs and music festivals, but that band had too many stylistic limitations and Casey disbanded the group. Currently, his focus in on leading the Casey Ryder Trio and his Django Reinhardt-inspired gypsy jazz quartet, Casey Ryder & Twango.

SLIM SANDY
http://www.slimsandy.com/
SLIM SANDY loves to strum his guitar, blow the harp and stomp the beat! He plays a combination of his own compositions and rockabilly or country blues songs from the late 40’s and early 50’s. “Slim” was the original drummer for Ray Condo, from 1985-1994, and has been the lead singer and rhythm guitarist with the Crazy Rhythm Daddies since 1988. Other acts he’s backed up on drums include the Howlin’ Hound Dogs, Sophia Wolff and SUN Records legend, Billy Lee Riley. “Slim” can be seen singing the country blues in his hometown of Victoria, Bristish Columbia!

Mellow, groovin', loungin' tunes for the urbane hipster - Casey Ryder’s music somewhat defies categorization; he is a musical vagabond whose idiosyncratic, original songs use a variety of styles. Casey plays an assortment of instruments, including vintage guitars, and sings his well-crafted songs in a collection of vocal styles ranging from Chris... more info

Slim Sandy has been playing roots music for over 30 years, in bands like Ray Condo, the Crazy Rhythm Daddies and the Howlin Hound Dogs, and now with his trio the Hillbilly Boppers. more info
Submit info on this show to our admins