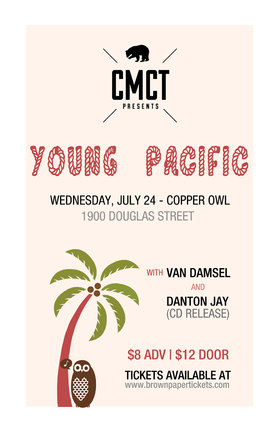 Clever, chameleonic, catchy and complex: so are a few ways to describe Young Pacific's distinct and exciting fusion of musical influences ranging from classic to contemporary, and everywhere in between.

Formed in 2009, Vancouver's Young Pacific has shared the stage with Canadian favourites including the Arkells, the Zolas and Bend Sinister, to name a few. Working with producers Tom Dobrzanski & Elisa Paengsaeng (Monarch/Vertical) and Andrew Spindor & Will Watson (Habitat/Green Couch), Young Pacific has achieved spots on legendary stages including Live at Squamish, Rifflandia, and the Rio & Rickshaw Theatres. These enormous opportunities have established them as a fresh musical act with a solid fanbase and a constant desire to grow.

Building on echoes of Fleet Foxes, Tame Impala and The War on Drugs, Young Pacific strive to push pop music into undiscovered realms, leaving boundaries and rules behind in the static. It's a meticulously crafted, restless wash of colour, melody and lyricism that keeps musicians and non-musicians alike on the edge of their seats. Young Pacific takes you down the shape-shifting trails of psychedelia and prog, cradles you with intimate tales from folk's familiar fires, surprises you with fervent dynamics, and makes you smile all at the end of it with a heavy dollop of unadulterated pop.

Danton Jay is a thought provoking singer/guitar-player/songwriter who combines musical flavours from multiple genres with important socio-environmental themes. After completing his degree researching promotional methods for sustainability and then travelling throughout Eastern Europe, Danton Jay returned to the studio to record a new and inspired album. In the Spring of 2013 he released 'Morcenx' which fully encompasses his artistic styling. Smooth, emoting vocals and moody guitar licks are his most outstanding qualities; but you will also find refined musicality and lyrical prowess in his music. The music from the new album focuses on sustainability themes throughout a beautifully arranged story of discovery and travels. Each song accentuates unique aspects from jazz, blues, R&B, and rock. The album is the perfect set for music lovers who appreciate variety and creativity, and this is exactly what is delivered on the album and at a live performance.


On the stage Danton Jay is a veteran performer who combines the class and skill of jazz with the intensity and thrill of rock. He is a sincere performer; nothing is forced. On stage he plays the same way he would alone; and it is within this sort of honesty where the intensity of a moment can suddenly send chills running up your spine. Simply put, his performances are captivating. Backed by an incredible five piece band featuring horns and a groovy rhythm section, catching a Danton Jay concert is not something you want to miss. Whether it's in your ear buds or at the show, you will enjoy Danton Jay.

It was the summer of 2010 when three-quarters of Van Damsel found themselves disbanding a death metal project in favour of indie rock -- quite the transformation, to say the least. Two years later they released their debut EP, Say Hello to Your Mother, recorded with producer Ryan Worsley (Dear Rouge, Tough Lovers). The record received modest exposurecatching the attention of several blogs (most notably appearing on the front page of the major American blog, Earmilk) as well as garnering college and local radio airplay. The EP was awarded funding from The Foundation Assisting Canadian Talent on Recordings (FACTOR) which encouraged the creation of their latest project.

Van Damsel's Bad Faith sees the return of Worsely as producer and a noticeable amelioration in songwriting and musicianship. The album's first single, "The Sunshine, Girl" colourfully sets an indie-dance groove to crooned dreams of escape to sunny paradise. The track was released on March 29, 2013 and followed up with a music video in May. Bad Faith will be released later this summer, and Van Damsel will continue their evolution.

Bringing together the distinct energy of the west coast with upbeat melody, Young Pacific captivates audiences with a distinct brand of indie pop. Their songs explode on stage as they combine with the bands high-energy presence to captivate audiences, and move them on the dance floor. Hailing from Coquitlam B.C. a cloudy suburb of Canada's west ... more info