Steelwheels was formed in 2002 with a core group of musicians going back to 1996. Their dedication and musical abilities have allowed them to faithfully reproduce the sounds of the Rolling Stones recordings. Guy Turnbull’s vocals are so close to the real thing, one would swear it was Mick actually singing. Recently the band added a sax player and a female vocalist and a R&B medley comprising songs the Stones have covered in live performances plus a couple they wished they would have! Open guitar tunings, stage theatrics and a passion for the Stones makes this band a must see.

Guy Turnbull, aka “Mick”, lead vocals, has performed as Mick Jagger for over two decades. His uncanny recreation of Mick’s distinct vocal style helped him win a contest at a local radio station. Reworking a Stones classic for concert tickets, the song became a listener favourite and found it’s way onto regular rotation. He went on to form Stikky Fingerz in the mid 80’s, Vancouver’s first Rolling Stones tribute band. Guy’s endless energy and vocal chops carry over to his performances with SteelWheels.

Al Sirett, aka “Keith”, lead guitar, vocals, is a native of Oxford England. His musical influences are naturally rooted in the groups from the old country, the Beatles, the Kinks, the Who and of course the Rolling Stones. His love of British music, past and present, plus a keen ear and attention to detail is evident in every song he plays. But it his bang on and over the top presentation of Keith Richards that showcases Al’s musical and performing ability.

Dean Way, aka “Charlie”, vocals, drums and brother Gary Way, aka “Bill”, bass, vocals, hail from London England. Playing together for more than 25 years, they have performed in countless original and cover bands and travelled western Canada extensively throughout the 80’s and 90’s. The Bro’s lay down the bang on groove of Watts / Wyman and supply the musical fabric for “Keith and Ronnie” to weave.
Elaine Magus, vocals, started performing at the age of five where she sang with her church choir. Elaine switched to rock (& R&B) in her formative years, influenced by powerful female rockers such as Ann Wilson, Janis Joplin, and Pat Benatar. Her powerful style infuses every song she belts out with a unique stamp of energy and passion. Recently linking with SteelWheels to provide background vocals, Elaine admits she loves sharing the spotlight with the Stones. You can also catch Elaine fronting her Pop, Rock project, “Jinx”.

Ryan Glasgo, aka “Bobby Keys” sax, vocals, is a very busy man. Besides his duties with Steelwheels, Ryan teaches sax and played for many years with "Los Furios", a ska, reggae, punk band. His varied influences include everything that moves and grooves (this doesn't include Kenny G). Ryan has now expanded his musical boundaries taking on the role of “Bobby Keys” and enjoys screaming out all your favourite Stones sax solos. 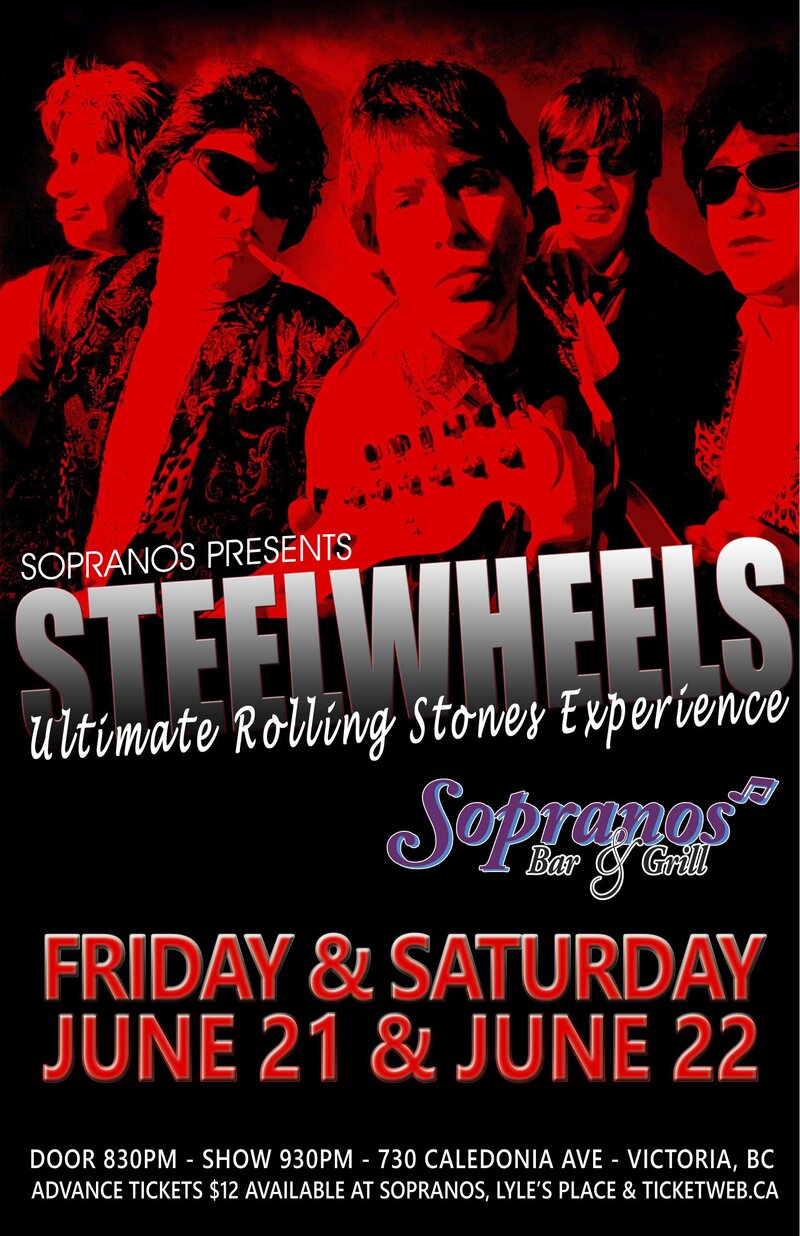