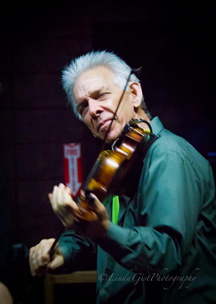 Genre: Violin Jazz..
Django Reinhardt may have invented Gypsy Jazz, but he saw himself as a mainstream jazzer, idolizing American Jazz heroes, Duke Ellington, Charlie Parker, Dizzy Gillespie, AND Thelonious (Sphere) Monk. Djang-O-Sphere exposes those connections. Django, like Monk, was a composer, as much as a player. Django's post-WWII works, particularly, show more affinity with the Be-Boppers than the Gypsy Jazz tradition. Like Monk, Django's music is deeply personal and eccentric. Come out and share the delight in discovery of the affinity of these Father's of Jazz.