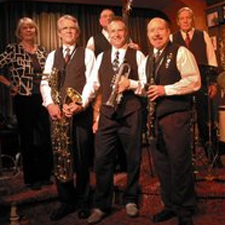 For well over a decade this Victoria jazz band has stolen show after show on the "trad" jazz circuit all over North America. They have reverted to being a sextet when gigging at home with the addition of a former bandmate, Doug Rhodes on reeds and vocals and replacing Jim Armstrong with Mike Broadley on trumpet. Home is where they want to be for the foreseeable future!

Featuring tight vocal arrangements on swing and New Orleans classics from the 20's to the 40's, CanUS can regularly be heard at Hermann's on two Sundays per month from 4:00-7:00 pm. Oh - and their 8 CD's are very popular, too!

In the "Mississippi Rag' , Oct. 2001, reviewer Paige Van Vorst states"CanUS is a one-of-a-kind group. They perhaps feature too many vocals for some listeners, but they're having so much fun it rubs off on the listeners. Toni Blodgett has created a group with a sound unlike any other on the scene today, which is a tremendous accomplishment. If you like small group jazz of the 1930's, you should definitely give this one a try."

For more information on jazz shows at Hermann's Jazz Club go to hermannsjazz.com