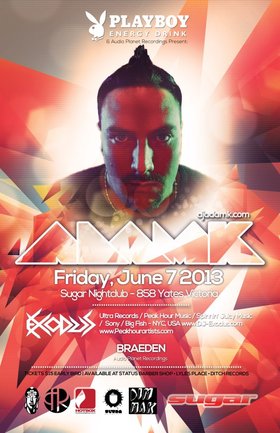 For Toronto, Canada's Adam K, it's tremendous amounts of skill, creativity, hard work, and years of perfecting his craft that have catapulted him into the upper echelon of dance music.
Fueling his stellar live sets is over 15 years of experience in mastering sound design, audio engineering and producing. His keen ear for shaping sounds and knack for composing emotional hooks fuse together to create his trademark style. Adam's solo and collaborative projects have dominated the underground including landmark tracks such as "I Can Feel", "You're Not Alone", "Question", and "From The Speaker" which melded the minds of Adam, long-time friend Soha, and Toolroom frontman Mark Knight. Of course it was another collaboration with Soha that captivated the world with "Twilight". Named an Essential New Tune on the legendary BBC Radio 1, Pete Tong set the tone for one of the biggest records of 2008, which was confirmed by landing at #2 for the best-selling tracks overall on Beatport that year. More recently Adam's collab with international superstar Kaskade called "Raining" hit #1 on iTunes Dance for the US and Canada and was the top single off Kaskade's latest album "dance.love". Adam's music is a favourite of the world's top DJs seeing current releases such as "Complicated", "My Love" and "Wake Up" be a staple in sets from the likes of Tiesto, Kaskade, Above & Beyond, Gareth Emery, Markus Schulz, Mark Knight, Funkagenda, Rank1, Judge Jules, Matt Darey, Cosmic Gate, Robbie Rivera, Menno de Jong, and more.
Not just an original composition mastermind in the studio, it's Adam's mind for remixing, along with partner Soha, that has catapulted him into superstardom as the duo's remixes are some of the most pinnacle dance records of the past few years. Kaskade's "4AM", Benny Benassi's "Come Fly Away", Deep Swing's "In The Music", Heikki L & Ercola's "Deep At Night" and most notably the Adam K & Soha Remix of Reflekt's #1 UK Dance Chart tune "Need To Feel Loved" raised the duo to astronomical heights. Adam has reworked singles from dance icons Tiesto and Deadmau5, to mainstream chart-toppers Keri Hilson, Shiny Toy Guns, and Robyn, to one of the most legendary bands of all time in U2. It is his vision, passion, and technique that keep them in high-demand from international hit-makers and underground sensations alike.
Travelling around the globe, Adam's mastery in the studio translates directly into the art of DJing and he has rocked single-show crowds upwards of 10,000 for legendary promoters and venues such as Ministry of Sound, Godskitchen, Global Gathering, The Guvernment, and Privilege Ibiza. From festivals across Europe, North and South America, Adam's definitive sound blows up dance floors and pushes the hands to the rafters. Though primarily known for his melodic blend of progressive house, Adam's style is much more diverse, and showcases his love for all things house, tech to electro, deep to banging. It's this affection for many genres and his ability to manipulate a crowd into a frenzy that cements his status as one of the world's most memorable performers.
Not just a producer and DJ, Adam is also the founder and head of Hotbox Digital. The label has been a vehicle for Adam to break into the industry and has released a multitude of incredible tracks from some amazing talent including Soha, Addy, Dataworx, Macca, and JELO. For 2010, Adam has a renewed focus on Hotbox, and will be expanding the label's international reach both with fresh new original material and new signings from upcoming and established talent.
With collectively over 4 million plays on You Tube and support from the world's DJ elite, Adam has seen his music effect the lives of music lovers around the world. With the rise of Hotbox Digital and a full slate of touring, solo projects, collaborations, and remixes on the horizon, this is the year of Adam K.

The last 2 years have been a hurricane of successes for Exodus, with many tour stops in the US, Canada, Mexico, Puerto Rico, Europe, The Netherlands, Venezula, Poland, Spain, and his original and remix work has been hitting the charts at breakneck speed, faster than almost anyone in the industry.Exodus boasts a very impressive discography, already full of strong chart topping hits and big #1-sellers. On the circuit his heavy supporters read like a diverse who’s-who of the most relevant dance music Artists today: Tiesto, Steve Aoki, Avicii, Fedde Le Grand, Chuckie, Wolfgang Gartner, Dada Life, Zedd, Knife Party, Porter Robinson, the list goes on. The diversity of his A-List DJ fan base also speaks to the broad appeal of Exodus’ sound.

This determined artist fits with 4/4 fans worldwide, whether it’s rocking Pacha in NYC, destroying the Electric Daisy Carnival, to burning up the Ultra Music Festival in Miami, and tearing apart clubs and festivals everywhere in between. As owner of Peak Hour Music, Exodus has branched out, being able to work with some of the largest artists in the industry. In the studio, recent works have seen Exodus working on projects for Deadmau5, Starkillers, Alex Kenji, Chuckie, Dada Life, Lazy Rich, Laidback Luke, Manuel De L Mare, Leewise, Donald Glaude, Nadia Ali,and countless others. Peak Hour Music is now ranked officially in the top 15 Largest & highest selling labels on Beatport.com, as is host to a massive talent roster.

FOR ALL OUR PHOTOS, VIDEOS, EVENT INFO, INVITATIONS & PARTY ANNOUNCEMENTS: