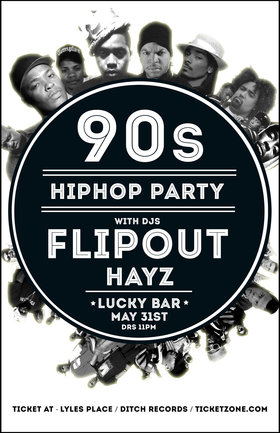 
------------------------- FLIPOUT! -------------------------
A highlight of the Vancouver music scene, DJ Flipout is best known from the Beat 94.5, a gig where he remixes the hits live in studio for The 5 O’clock Traffic Jam. But don’t let the respectability of a steady job fool you, this Vancouver DJ is an internationally renowned music buff whose eclectic and cosmopolitan style has won him many local and national MC and DJ competitions.
For two years, Flip’s all hip-hop mix show with Jay Swing was named "Best Mixshow in Canada" by the Canadian Urban Music Industry. Oh, and if that doesn’t impress, he’s also been distinguished as an honorary member of the Universal Zulu Nation by hip-hop Godfather Afrika Bambaataa.
When Flipout’s not working the club scene or sounding off over the airwaves, you might find him on tour. So far, he’s DJed for names like Raekwon (Wu-Tang) (http://vimeo.com/15494494), Talib Kweli, and Jin the MC. Flipout has also opened for Jay Z, Biz Markie, Grandmaster Flash, Nelly, Ice Cube, Lil Jon, and Jermaine Dupri, just to name a few.
By working with notable DJs, including DJ Vice, DJ Starting from Scratch, DJ Spider, Questlove (the Roots), DJ Kemo, DJ Eleven, Team Canada, eH!, and Ali Shaheed Muhammed (A Tribe Called Quest/Lucy Pearl), Flipout has cultivated a knack for combining unexpected music to create stimulating soundtracks that boast a rich and complex sound.
He decided put his skills to the test as a contestant in the 2010 Red Bull 3 Style Competition. An electrifying sequence at the Commodore in Vancouver advanced Flipout to the National Finals in Toronto.
That same year, he was also nominated in four different categories at the STYLUS DJ Awards, including Radio Mixshow of the Year, Club DJ of the Year, Club MC of the Year and Vancouver DJ of the Year, which he won. In 2011, Flipout was named Favorite Local DJ (Westender Best of Vancouver Awards), and he took the coveted title of Top 40 DJ of the Year (Clubvibes Vancouver Nightlife Awards) in 2012.
With a proven ability to keep his finger on what’s current, Flipout has performed throughout Canada and across the globe in hotspots like Spain, Australia, and Puerto Rico.
Listen as he navigates the tectonic gaps in musical tastes to deliver the tunes that make crowds flipout.
http://www.facebook.com/flipoutvancouver
http://listn.to/Flipout
http://youtube.com/FlipoutMusic
http://www.soundcloud.com/Flipout
http://twitter.com/DJFlipout

Jesse Manason is a solo / session drummer from Victoria, BC. He has become one of the most sought after drummers on the West Coast, known for stealing shows with his high energy live performance and unique & signature style. *Available for live gigs and recording. more info
Submit info on this show to our admins