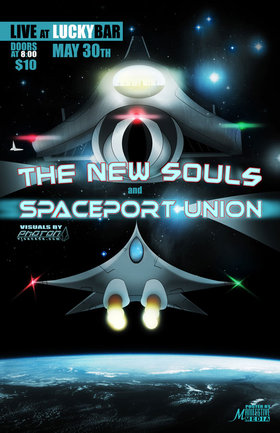 The New Souls are a six piece Indie Soul band from Victoria, British Columbia. Their sounds range from melodically melancholy to robust and brash. The band has an eclectic range of influences, such as Stevie Wonder, Prince, Allen Stone, Al Green, Herbie Hancock, Radiohead, Led Zeppelin, and more.

Recently chosen to play at Rock of the Woods - this band is getting a lot of buzz for having a high energy, fun live show. http://www.facebook.com/TheNewSouls


PLUS YOURS TRULY...
SPACEPORT UNION

Pink Floydesque sounds drifting through the atmosphere, blending their sound waves with Porcupine Tree, Metric, My Morning Jacket and Kate Bush, twirling the sound around Phish and early 70s Zeppelin, then hurtling the melded sonic vibration through a black hole at the speed of light until it returns as a unique and utterly heartfelt explosion of progressive, EPIC art rock.

We are going to take you on a journey with us to realms of magic and mystery, across time and space to the furthest reaches of the auditory and visual experience, into nebulas of sound... http://www.spaceportunion.com


with visuals by the MAGICAL AND MYSTICAL
PHOTON

Erik Nortman aka Photon has traveled to many places in the world and has been inspired by many different people and cultures. His love of live concerts and theatrical performances has given Photon a great sense of event aesthetics and a strong ability to add theme and mood to any venue. Photon is a highly motivated and artistic entrepreneur and is passionate about bringing sharp and exciting visuals to the world.

He has many years experience working within the theatre and staging community. He has worked along side and for I.A.T.S.E. 168 the local staging union to help set up many large scale shows. This work has given him experience in arena and theatre environments. Photon has a flexible, friendly manner, and a strong, dedicated work ethic.

Photon has had 12 years solid experience working in nightclubs bringing his show to various DJs and bands on top of going to shows for 25 years and gaining insight as to what the moment needs. He has worked with performers such as Jefferson Starship, Prince (nightclub after party) and DJs such as DJ Dan, Matt the Alien, and Adham Shaikh.
http://www.vjcanada.com/

The New Souls are a six-piece soul/R&B band. All of them lovers of soul music, a union was created to express soul music in a way that feels soulful to them, a way to incorporate broader musical influences into a genre that is based on feeling the music, and more specifically, the groove. The band is getting ready release it's first EP for spring... more info
Submit info on this show to our admins