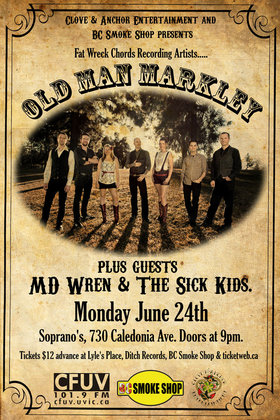 An amalgam of LA’s finest punk bands and seasoned bluegrass musicians, Old Man Markley is creating music that defies boundaries. Founded in 2007 in the sunny San Fernando Valley, OMM cut its teeth playing countless jams of bluegrass standards and covers of distinctly un- bluegrass songs done bluegrass style. Soon, out of the chaos grew original material that combined everything the band loved about all the different styles of music the members grew up playing and writing. The band played its first official show in 2008 at a small bar called the Old
Towne Pub in Pasadena. The show yielded a capacity crowd and sold out of beer, and people literally danced on the bar.

Now three years strong, the love for Old Man Markley continues to grow. The band’s debut album “Guts ‘N Teeth,” was recorded by Job Ford of L.A.’s punk champs The Bronx and released in January 2011 on Fat Wreck Chords. OMM has had the honor of sharing bills with such legendary acts as NOFX, Flogging Molly, Against Me!, Bad Religion, Wanda Jackson, the Devil Makes Three, Youth Brigade, and The Reverend Horton Heat. Look for OMM to be having fun at every show-- and for the crowd to be having even more.

Drawing upon his uncanny ability to offend and disturb those around him with ignorant diatribes, MD Wren assembled some of the best country and western players in Victoria, steeped them in the traditions of punk and shitty rock, placed them into a microwave on high and mutated them into what is now known as THE SICK KIDS. Come out and watch them stagger from the bar to the stage and assault your heart with song that EXCLAIM! Magazine has described as "Egregiously deft".