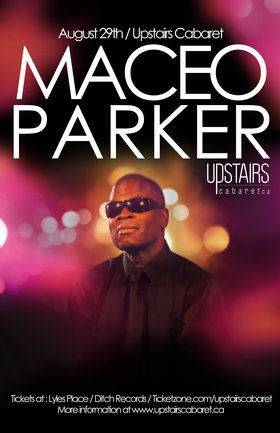 Maceo Parker: his name is synonymous with Funky Music, his pedigree impeccable; his band: the tightest little funk orchestra on earth.

Everyone knows by now that he’s played with each and every leader of funk, his start with James Brown, which Maceo describes as “ like being at University “; jumping aboard the Mothership with George Clinton; stretching out with Bootsy’s Rubber Band. He’s the living, breathing pulse that connects the history of Funk in one golden thread. The cipher that unravels dance music down to its core.

“Everything’s coming up Maceo,” concluded DownBeat Magazine in a 1991 article at the beginning of Maceo Parker’s solo career. At the time Maceo was remembered by aficionados of funk music as sideman; appreciated mainly by those in the know. More than a decade and a half later Maceo Parker has been enjoying a blistering solo career. For the past sixteen years Maceo has been building a new funk empire, fresh and stylistically diverse. He navigates deftly between James Brown’s 1960’s soul and George Clinton’s 1970’s freaky funk while exploring mellower jazz and the grooves of hip-hop.

His collaborations over the years performing or recording or both have included Ray Charles, Ani Difranco, James Taylor, De La Soul, Dave Matthews Band and the Red Hot Chilli Peppers. His timeless sound has garnered him a fresh young fan base.

The world’s funkiest sax-man, the legendary Maceo Parker, spent two decades as the right-hand man of James Brown, blowing righteous saxophone in an electrifying way that could shift from melodic to percussive with awesome effect. Long associated with the inimitable funk gods George Clinton and Bootsy Collins and various incarnations of Parliament... more info
Submit info on this show to our admins