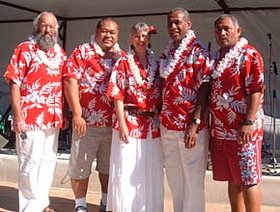 Experience South Pacific charm with the relaxing sounds of Tradewinds, bringing you the music of Western Samoa, New Zealand, Rotuma, Hawai’i and Fiji.

Tradewinds is a Victoria B.C. band blending an extraordinary diversity of musical backgrounds. The band’s promise is a memorable performance as they present the haunting music of the South Pacific in the indigenous languages and English.

PENI TAVUTONIVALU is an experienced musician who has played mostly in dance bands in his native Fiji. His extensive repertoire includes many old standards, rock and roll tunes as well as the beautiful music indigenous to the South Pacific.

MAUREEN CAMPBELL's musical background is classical. She has performed in numerous choral groups and is currently a member of the Victoria Gaelic Choir.

NOA MOLIA hails from Rotuma in Fiji and shares Peni's background of growing up with music as an integral part of his culture.

JOE FUAILEFAU adds the Samoan influence to "Tradewinds" and provides a strong rhythmic presence. Joe not only plays a mean 'ukulele but is also a fine songwriter, writing in both Samoan and English.

ALAN LAW is a native-born resident of Victoria BC, and has been a player in the local acoustic music scene since the 1970's. He has appeared with a broad variety of folk, bluegrass and old-time ensembles, performing everything from parlour songs to Calypso.

You can learn more about the band by going on their website: http://www.halfmoon.ca/tradewinds/index.html