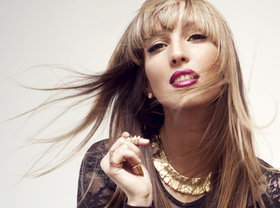 “With stunning and spine chilling vocals, Georgia Murray is vicious on the mic, melting the hearts of many with a single note!” – HipHopCanada

Opening for artists such as KRS One, Talib Kweli, Warren G, KOS, Shad and Jurassic 5, BC’s singer/songwriter Georgia Murray is no stranger to the stage. Georgia’s infectious alt/soul vocal style is fresh and authentic with haunting undertones. With her second EP being released late 2013 with creative partner, D Whiz, and Grammy winning producer, Chin Injeti, this is one singer / songwriter that is well on her way to big things. D Whiz producer/co-writer/DJ, David Parfit guitar and Jesse Manason drums

“We Were Born To Glory. . . quite possibly one of the catchiest, well-thought-out pop albums of the year.”- MusicNerd Chronicles

Prepared to be wowed by Royal Wood, the Toronto-based singer/songwriter/pianist whose classic pop style has drawn comparisons to Hawksley Workman, Ron Sexsmith, Randy Newman, and Rufus Wainwright. Over the last 10 years, Wood has become known for his insightful and well-crafted “cabaret pop.” But he’s switched gears on his sixth CD, the Juno-nominated "We Were Born To Glory," which has fewer of Wood’s jazz-noir introspective songs and more of a pop-rock feel. His new sound has had a real impact – aside from charting well for weeks on the radio, he’s had a video in heavy rotation on Much Music, and several of his songs have been included in TV shows such as Grey’s Anatomy. Steve Zsirai bass, Dean Drouillardguitar and Adam Warner drums