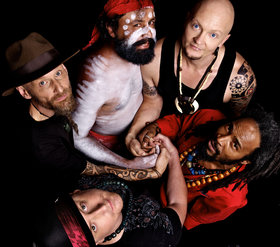 “Ganga Giri, a psychedelic tribe of musicians that create an amazing multi-layered blend indigenous/electro/dance/rock... their sound and energy is intoxicating!”

Fight in the Fields is a hip-hop group that draws on a wide array of old school and contemporary musical influences and is strongly committed to delivering a thrilling live-band experience. FITF has shared the stage with Josh Martinez, Sweatshop Union, Rascalz, Hill-Top Hoods and Moka-Only. Fight in the Fields demonstrates how Hip-Hop can be just as compelling a live-band experience as any other genre. John Hayte keyboards, Northern Light vocals/MPC/keyboards, Derry vocals, DJ Schaps vocals, James drums and Wellionaire turntables

Ganga Giri - (gun-gah gear-ree) A didgeridoo virtuoso and innovator, who fuses this ancient instrument with electronic production and vocals, this music is about connecting to culture. Ganga Giri started playing the drum kit at eight years old, and has travelled the world learning, studying tabla in India, and using a range of percussion instr... more info
Submit info on this show to our admins