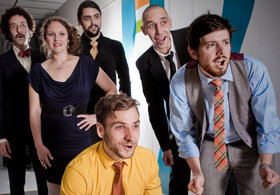 The Nova Scotia jazz scene hasn’t produced anything hotter than Halifax’s award-winning Gypsophilia, a stellar sextet of amazing young musicians who came together in 2004. Although the original inspiration for the ensemble was the gypsy jazz of Django Reinhardt, they soon added elements of tango, klezmer, funk, indie rock, New Orleans and bebop into the mix, creating a swinging hybrid that’s great to listen to and even more fun when you’re dancing. Their CDs, such as 2011’s "Constellation," are a blast, but it’s their sold-out live shows where these fun-loving virtuosos truly come into their own. It’s hard to exaggerate just how much excitement these guys will create out on the dance floor when they return to Victoria. Ross Burns guitar/percussion, Matt Myer trumpet/organ, Gina Burgess violin, Alec Frith guitar, Nick Wilkinson rhythm guitar and Adam Fine double bass

Halifax-based Gypsophilia was initially inspired by the music of French jazz guitarist Django Reinhardt, but soon found its own distinctive sound through unique and original compositions and the melding of the band members varied backgrounds and influences including klezmer, funk, classical music, indie rock, hard bob and post bop. The result is an... more info
Submit info on this show to our admins