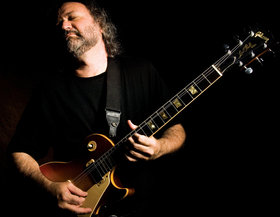 The club scene abounds with innumerable blues-rock “guitar stars,” but flashy style is nothing compared with heart, emotion, and soul – the very qualities that have made Atlanta’s Tinsley Ellis a cherished singer and guitarist for a quarter-century. Ellis wears his Southern roots with pride, and both his six-string pyrotechnics and his gritty vocals are propelled by the surging power of classic rock. He’s also a damn fine songwriter, and over the course of recording a dozen CDs has established himself as one of America’s most authentic and deeply-schooled blues artists. His newest CD – the aptly named "Get It!" – shows why he’s such an audience favourite. Anyone who loves the exhilaration of a blast of blues-rock needs to check Tinsley Ellis out!!! Ted Pecchio bass and Ben Williams drums