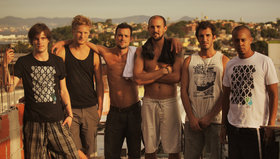 The Boom Booms are a Vancouver-based, six-piece rock pop band with strong Latin and reggae influences who have built a loyal fan base that stretches across generations. The band recently wrapped a successful tour of Brazil that saw them playing shows across the country, including sold out shows in Rio de Janeiro and Manaus, in the heart of the Amazon. This summer The Boom Booms are bringing the funk home with a cross Canada tour, featuring their freshly minted EP “Make Dat, Do Dat.” Aaron Ross vocals/guitar, Geordie Hart bass/vocals, Sean Ross vocals/cavaquinho, Tom Van Deursen guitar/vocals, Theo Vincent percussion/vocals and Richard Brinkman drums

"Some of the tightest, smoothest, sexiest soul and funk produced in the city right now comes courtesy of six guys who all grew up within a few blocks of each other on Vancouver’s East Side." -The Georgia Straight The Boom Booms are an Indie Soul band from Vancouver, BC. The group consists of brothers Aaron Ross (lead vocals) and Sean Ross (k... more info
Submit info on this show to our admins