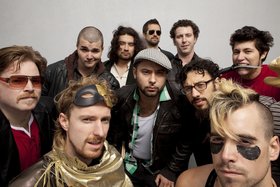 If you’re ready to dance like a maniac till your shoes burst into flames, then sign on for some serious partying with Vancouver’s incomparable Five Alarm Funk. This alarmingly energetic and skillful 10-piece juggernaut draws inspiration from Afrobeat, James Brown, and Kool and the Gang, and has been performing nationally and internationally for nearly a decade. From the jazz festival circuit to a snow-melting performance at the 2010 Winter Olympics, these guys play killer dance music with the intricacy and finesse of a jazz band. Their album, "Rock the Sky," was nominated for the 2013 Juno Award “Instrumental Album Of The Year.” Gabe Boothroyd guitar, Tayo Branston drums, Tom Towers congas, Carl Julig timbales, K-Neddy shekere, Neil Towers bass, Oliver Gibson guitar, Nimish Parekh trombone, Dameian Walsh saxophones and Ryan Naso trumpet