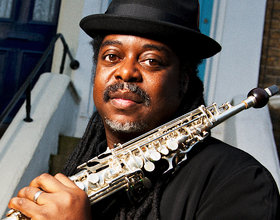 After nearly 30 years on the British jazz scene, soprano saxman Courtney Pine has achieved legendary status. As well as being an incendiary jazz soloist who co-founded the Jazz Warriors and was at the forefront of the “new jazz” scene in the early 1990s, Pine was simultaneously exploring the musical roots of his Jamaican heritage via brilliant, rhythm-driven dance music that spoke to the heart of Britain’s Afro-Caribbean community. With more than a dozen albums to his credit now, Pine has won numerous awards – including an “Order of the British Empire”! Last year he brought out the exuberant, dance-happy House of Legends, a stylistically broad tour-de-force of pan-Caribbean rhythms that leaps effortlessly from Sonny Rollins-style calypso to deep, in-the-pocket reggae. "House of Legends" was a huge hit with the critics, including Jazzwise, who named it their 2012 “Album Of The Year,” and Pine is proudly showcasing it on his current tour. Don’t miss the party! Robert Fordjour drums, Cameron Pierre guitar, Vidal Montgomery bass and Samuel Dubois steel pan