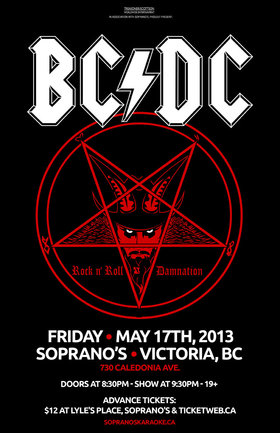 There are tribute bands, and then there's BCDC. They were born of bush party ashes in the summer of 1999.

BCDC Unlike many tribute acts claiming to be "North America's #1 Clone" or "Just Like the Real Thing", BC/DC has turned the tables. The band takes a comedic approach, claiming the tunes as their own, and to having "heard of some BC/DC tribute band from Australia". They rarely give factual interviews to big city press. Adding to the schtick, the band members all go by comic aliases - lead singer Brendan Raftery's Brian "Bon" Johnscottson paying respects to both AC/DC's famous frontmen. It's working. It's the gift that keeps on giving.

BC/DC's live show has become a legendary, and necessary, "rite-of-passage" amongst their unwavering supporters and believers. With over-the-top stage energy, they deliver every last note of all the classic songs with absolute authority. You get tired just watching them. BC/DC is heavily rooted in the Bon Scott-era catalog (Dirty Deeds, TNT, Jailbreak, Let There Be Rock), but also covers AC/DC's second "golden era" with all the essentials; Back in Black, For Those About to Rock, Hells Bells, and many more. Hey, there's always another AC/DC tune.. and BC/DC always seems more than eager to blast it out.

other sites:
Remember the first time when you believed in Rock 'n Roll? "When AC/DC first hit the scene as a bar band in the early 70's, their dirty, mean, pre-punk live act spread from one watering hole to another Downunder like three-for-one pint nights. These days, the occasional overblown AC/DC arena rock show is all we're going to get. That's why BC/DC... more info
Audio: Jailbreak, For those about to ride
Submit info on this show to our admins