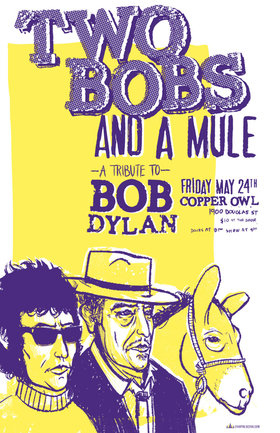 Music: Country / Bluegrass / Rockabilly, Folk / Celtic / Latin / World, Pop / Rock / Indie
Two Bobs and a Mule was started by Lucky Budd in 1999, and has performed an tribute to Bob Dylan every spring since! What started as a duo project has evolved into a full band, rarely ever having exactly the three members the name would imply. Two Bobs plays well known favorites as well as strange and unknown gems, and often arranges early tunes Bob performed solo as a band.

Since 1999, Two Bobs and a Mule have been playing Logan's on or around Bob's Birthday every year. Electric and Acoustic Dylan. A favorite of Victoria's Bob Dylan Appreciation Society. more info
Submit info on this show to our admins