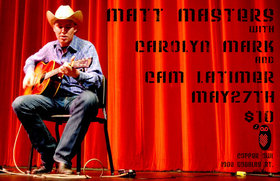 CAROLYN MARK
"Mark's music is so authentic in its back porch vibe, it seems to come with its own direct link to Loretta Lynn's '60s heyday - like her heroes, Mark is not afraid to rail against a man too drunk to understand his own fuck-ups. Not to say Mark is some kind of saint: Her gigs are known for their off-balance candor and ribald humor as much as the homespun tunes. Go for the music, stay for the dirty jokes."
Metromix New York
http://www.carolynmark.com/

CAM LATTIMER
Cameron Latimer has been a singer/songwriter from the time he first picked up a guitar sixteen years ago. Since then, he's written over a hundred songs and recorded over a third of them professionally. At 19, he met musician Adam Dobres who was to become Latimer's long-term collaborator. Together, along with Rueben Degroot, they formed The Seams, a band with a perpetual personality disorder perhaps best described as an alt-country-jazz band. They released their debut album Castaway Motel in 2004. Simultaneously, Latimer contributed significantly to the projects of local artist Ridley Bent. Culling what he learned through these collaborations and drawing on such varied inspirations as the work of Elliot Smith, Django Reinhardt, Lyle Lovett and Jeff Tweedy, Latimer has been writing and recording songs for his solo debut, Fallen Apart. Featuring producer Johnny Ellis, drummer, Pat Steward, bassist Rob Becker, and lead guitarist Adam Dobres, Fallen Apart melds a vast wealth of experience, skill and emotional depth. ..
http://www.myspace.com/cameronlatimer

$10 at the door
Copper Owl is cash only

The Queen of Vancouver Island and World Famous Boozy Chanteuse sings songs that'll tickle your heart and break your funny bone. more info
Submit info on this show to our admins