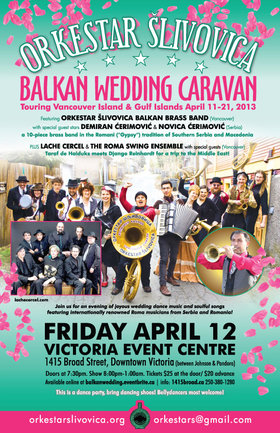 Balkan countries are famous for their elaborate wedding rituals, with music being an integral part of every wedding. Songs vary from ballads that reveal the eastern roots of Turkey and Rajasthan to jazz interpretation with full Balkan brass orchestration. The music tells stories of joy and happiness as well as deep sorrow and longing. Instrumentation includes harmonies of multiple trumpets; powerful driving rhythms of low and mid-brass; the eastern double-headed drum; and beautiful ornamentation of saxophone, accordion and powerful vocals.

Orkestar Šlivovica is a BC Balkan Brass band, and is currently studying under the guidance of Demiran Ćerimović, 3-time winner of the international trumpet festival at Guca, Serbia. Demiran and his son, Novica, live in Southern Serbia in the hub of Roma (“Gypsy”) Balkan Brass movement, where they lead the Demiran Ćerimović Orkestar.

While Europe and USA are being swept up in the Balkan Brass band craze, Vancouver’s Orkestar Šlivovica is eager to introduce this beautiful musical tradition to British Columbians. The Orkestar Šlivovica band has been performing Balkan brass music for 5 years and has played over 150 shows including festivals, late-night dance parties, folk dance events, and many weddings. Members of Orkestar Šlivovica have studied with prominent Balkan music teachers in Serbia, Macedonia, and California.
From April 12 through April 21, island audiences can experience Orkestar Šlivovica and Demiran Ćerimović on the BALKAN WEDDING CARAVAN tour. With stops on Vancouver Island and Gulf Islands, this event promises to bring a world-class musicianship in a theatrical setting that will be as interesting visually as it is musically. Some shows will feature guest bands and dancers, and most will offer opportunities for participatory folk dancing!

Opening for Ivan Lins Music fans with long memories will certainly recall when Victoria was lucky enough to have Romanian violin virtuoso Lache Cercel living and performing here. Originally one of Romania’s classical violin superstars, Cercel always had deep roots in his country’s Roma and gypsy traditions; after moving to Canada in 1987, he... more info
Submit info on this show to our admins