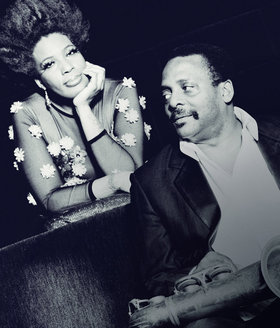 “An indefatigable tenor saxophonist with serious history . . . with a special guest, Macy Gray, whose voice is no less intriguingly textured” – The New York Times

Grammy Award winning saxophonist, David Murray has invited Macy Gray, the neo-soul diva with more than 14 million albums sold, made famous by her international hit single, “I Try,” to sing with his Infinity Quartet. Macy Gray is surrounded with some of today’s finest contemporary jazz musicians: Nasheet Waits drums, Marc Cary piano and Jaribu Shahid bass. Armed with a repertoire of new compositions and insightful lyrics by Ishmael Reed as well as a number of reworked Macy Gray soul hits, to which Murray has offered sharp and bright arrangements, the soul/blues project is a perfect blend of Gray’s unique voice and Murray’s sophisticated instrumentation. Though 56 year-old Murray has a whopping 130+ albums to his name, Murray’s newest, "Be My Monster Love," is indisputably his most creative project. The project features Macy Gray (and jazz vocal singer Gregory Porter), and the album is set to release on June 11th, just weeks before Murray and Gray take the Royal Theatre stage.

“With stunning and spine chilling vocals, Georgia Murray is vicious on the mic, melting the hearts of many with a single note!” – HipHopCanada

Opening for artists such as KRS One, Talib Kweli, Warren G, KOS, Shad and Jurassic 5, BC’s singer/songwriter Georgia Murray is no stranger to the stage. Georgia’s infectious alt/soul vocal style is fresh and authentic with haunting undertones. With her second EP being released late 2013 with creative partner, D Whiz, and Grammy winning producer Chin Injeti, this is one singer/songwriter that is well on her way to big things.