Join us during the Hermann's for an evening of Latin Jazz and Afro-Cuban rhythms...

Join us during the Hermann's for an evening of Latin Jazz and Afro-Cuban rhythms...

Join us during the Hermann's for an evening of Latin Jazz and Afro-Cuban rhythms with Pablo Cardenas and his Latin Jazz Combo.

Pablo Luis Cardenas is a classically trained pianist with the ability to play in a multitude of styles each with enthusiasm, skill and finesse. He has a charisma and charm that both intrigues and entertains his audience. This talented musician originates from Cuba and was destined for a life in music after his hands first touched a piano at the age of five years old. Pablo Cardenas Latin Combo gives a showcase for Pablo to play his own arrangements of traditional Afro-Cuban rhythms weaved together with Brazilian Sambas and classical songs with deep roots in jazz.

Peter Dowse is a bass player born in the UK before moving to North America in pursuit of a career in music. Peter spent a significant part of his working life in New York City and did a lot of his studio recordings in Rhythm & Blues and jazz working with great artists such as Omar Hakim. Peter went on to work as a record producer and performer and even shared the stage with Smokey Robinson and The Four Tops. Peter then re-located Montreal, Quebec and more recently to Victoria and has since been working with Pablo on his various musical projects.

Kelby MacNayr is a key drummer, percussionist and composer based in Victoria, B.C. Kelby actively performs/ records and tours in jazz, classical, new music, folk from around the world including the music of Cuba, Portugal, Zimbabwe and Brazil. Kelby began to play with Pablo over a year ago and has since performed as part of many different projects including his Latin Combo.

Hector Ramos is a master conga player from Cienfuegos, Cuba who graduated from the National Academy of Music in Havana. He moved to Canada five years ago and now makes his home in Victoria. Hector has played professionally in Cuba for over 10 years exploring all styles of Latin Jazz and Afro-Cuban Folklore through different groups. Hector now plays with Pablo Cardenas Latin Combo and has recently performed with the legendary Ganga Giri from Australia on his 2012 tour.

You dont' want to miss this incredible night of live Latin music!

Please note that seating at Hermann's Jazz Club is on a first come first serve basis and the doors open from 6pm.

Jazz, Classical, Latin, & Fusion from Victoria BC
Available for Shows/Gigs

Jazz from Victoria BC

The one, the only, Hermann's Jazz Club. Kick back and soak up the sweet sounds. ...
Open / Operational 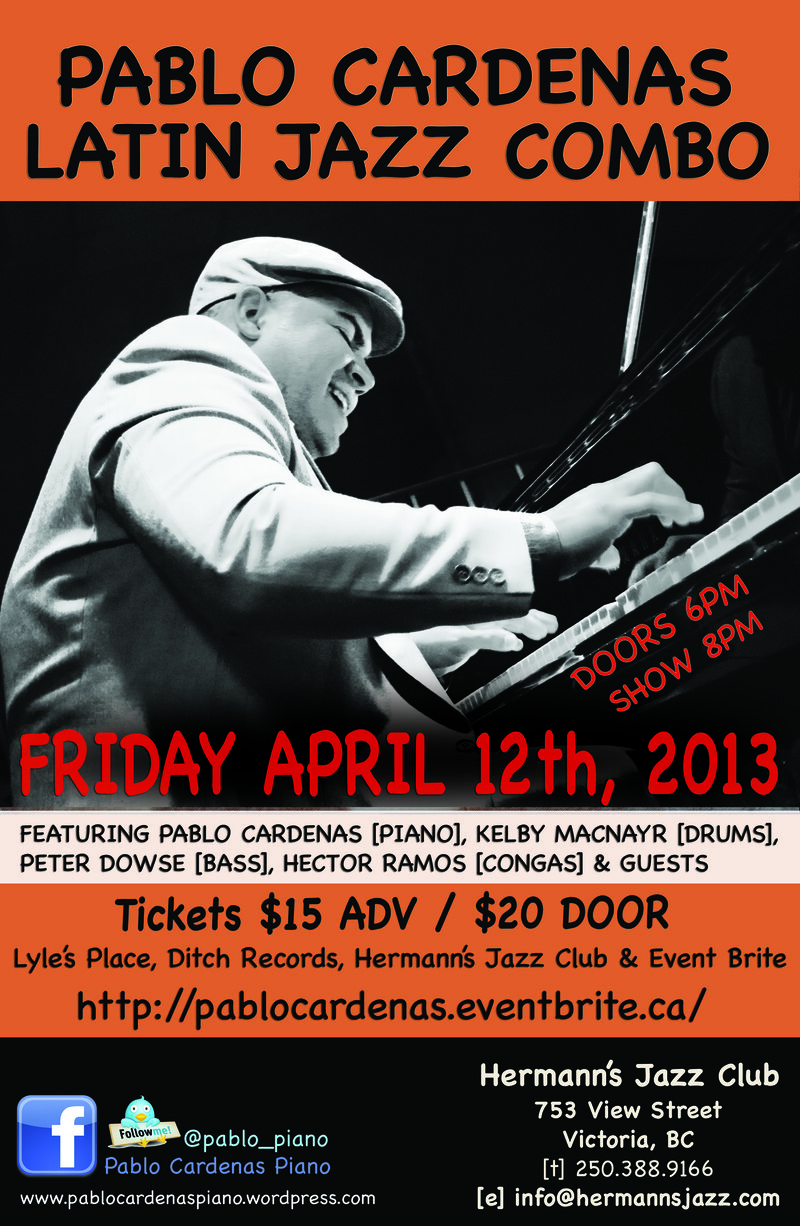