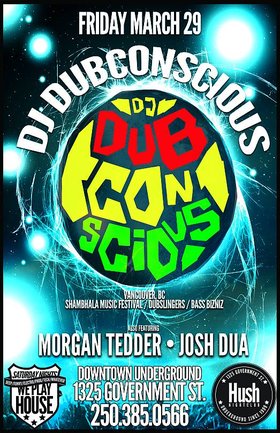 Dubconscious has come to represent both the east and the western coast of Canada. Born in Toronto & raised on the jungle & drum’n’bass sounds permeating the city in the late 90s & early 2000s, he developed a taste for hard beats drenched in reggae vibes. 2004 brought a big move across the country to the city of Victoria, which was nurturing a fledgling breaks & jungle scene – by the end of his first year of University, he had bought his first set of Technics and the seed was planted. Bouncing back & forth between TO & Vic for the next 3 years of school presented plenty of chances to play to different music to new crowds, adding reggae & dancehall to the repertoire, as well dubstep – in its infancy at this point. After school the move was made back east, joining up with the Dubslingers crew in Toronto, who are still holding down Canada’s longest running dubstep weekly - Dubslingers Wednesdays at Thymeless.

After having established a name for himself in Toronto’s competitive scene, he headed west once more, this time settling in Nelson, BC. After spending two productive years in the area immersing himself in both the great outdoors & the underground party scene, he's moved on further west to Vancouver, where he continues to DJ all across the board - dropping sets jam packed with a mash of many forms of urban & modern bass music at a wide array of events & venues across the city, the province, and the country on a regular basis. He's also been spending time locked down in the studio, slowly getting his production game together..

Dubconscious has appeared in nearly every major city in Canada, sharing the stage with the likes of The Roots, Andy C, Salva, Mixmaster Mike, Shy FX & Skibadee, Clicks & Whistles, Rusko, Dillinja, Plastician, Mimosa, DJ NuMark, the Glitch Mob & An-Ten-Nae (just to name a few) and has appeared at numerous music festivals including BC's Shambhala, Bass Coast, Diversity, & Loki Festivals, WEMF & Harvest Festival in Ontario, and the Dragon Festival in Granada, Spain. He curates a Sunday night weekly at The Keefer Bar in Vancouver, and was also running an all-vinyl reggae & dancehall weekly, Wax Wednesdays, up until the Waldorf Hotel's unfortunate closure.

Born in Zululand, Morgan Tedder moved to Canada at the age of 10. Calling Victoria, B.C. home since, he began DJing in 2002 and has been in the foreground of the Island drum n’ bass scene ever since.

Tedder is the founder of Liquidfunk.ca, long-time Whitebird resident DJ, regular drum n’ bass DJ at Hush Nightclub, as well as a staple at both the Soundwave & Tall Tree music festivals on the west coast.

Tedder recently collaborated with Mutt in the studio. The fruition of that partnership is now available as 12″ vinyl at all your favourite online record stores.

The man behind some of the great bass shows this end of Vancouver Island also happens to be one helluva Dj! Basslines you can roll with; beats you shouldn't live without.

Brought to you by Hush Nightclub. http://www.hushnightclub.ca