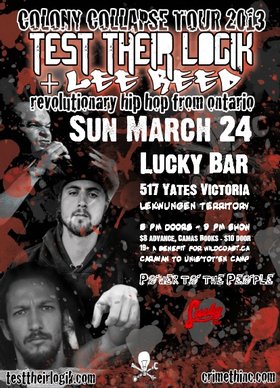 LEE REED is a state-bashing, bank-crashing, mic-eating monster, and a respected veteran of the Canadian Indie music scene. Best known as the incendiary mouthpiece for the legendary Warsawpack, Reed has been in the game for nearly 2 decades. Hiis latest independent LP "Emergency Broadcast" spent 4 weeks at #1 on the Hamilton charts; packed area performances; had play on CBC Radio3 and Radio2; and garnered glowing praise from every music
journalist in his city's daily, weekly and periodic publications.

Inspiring diverse groups of people to empower themselves and their communities, TEST THEIR LOGIK is calling on all to join the cause of liberation and revolution from oppression across the world. They are touring in support of their sophmore album "Be".

Testement and Illogik reunited after their legal battle over the G20 conspiracy charges. more info
Submit info on this show to our admins