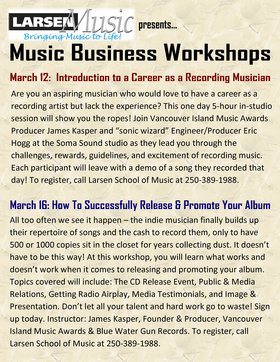 Music: Country / Bluegrass / Rockabilly, Folk / Celtic / Latin / World, Funk / R&B, Jazz / Blues, Pop / Rock / Indie
All too often we see it happen – the indie musician finally builds up their repertoire of songs and the cash to record them, only to have 500 or 1000 copies sit in the closet for years collecting dust. It doesn’t have to be this way! At this workshop, facilitated by James Kasper, Founder & producer, Vancouver Island Music Awards & Blue Water Gun Records, you will learn what works and doesn’t work when it comes to releasing and promoting your album. Topics covered will include: The CD Release Event, Public & Media Relations, Getting Radio Airplay, Media Testimonials, and Image & Presentation.

Don’t let all your talent and hard work go to waste! Sign up today.

Please bring any promotional material or CDs of your own music, if you may have it