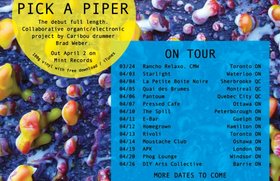 OKPK is a distillation of the essence of the Ookpikk project. Following the success of the Light Limited EP, and shows with luminaries like Hrdvsion, Tomas Jirku, and Michael Red, OKPK has emerged with a precision mix of deep techno and bass music with a unique palette of analogue and digital melody. The OKPK live PA brings dark anthems to the dance floor that linger long after the lights go up

PICK A PIPER
Overseen, produced, and recorded by Caribou’s Brad Weber, Pick a Piper is his collaboration with Angus Fraser, Dan Roberts, and others. Over the course of two EPs and a forthcoming album, the project has combined dance-music structures, a palette evocative of the natural world, and an increasingly heavy focus on electronics and production technique to create a sound poised between the organic and the synthetic.﻿