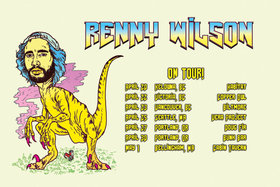 Disco's influence comes in and out of fashion now on a bi-annual basis. I'm not sure where it currently rests, but Edmonton, AB's Renny Wilson is destined to ensure it has another good run. The former teenage punk spent the last few years struggling to find his sound, settling for what he felt would be a record of straight pop music. However, after discovering the music of Arthur Russell and Donna Summer's Giorgio Moroder years, he found himself taking a detour. Sugarglider was originally intended as a throwaway record, a stopgap, cassette-only release preceding a proper album. But after a strong response, Wilson chose to sign with Mint and give it an official release. It was a wise decision on his part, because Sugarglider is a revelatory listen that exposes a genuine talent who's managed to excel at effortlessly nailing a distinct sound. Wilson's throwback curiosity is a large part of Sugarglider's charm — everything from the hokey album cover of Wilson and his ex to the soft-focus production suggests this is a work from a previous era, but in a retroist mindset, à la Ariel Pink or the DFA label. But disco isn't his only muse. It's good to know that Wilson's able to exercise his options, which he does on the flipside, expanding his repertoire, flirting with Krautrock pulsations on the title track, synth-based folk on "Mope Opera" and even chillwave on the windswept "Lady Pain." Sugarglider is a pleasant surprise and a great way to kick off 2013.

remember, we're a cash only bar too!

Wand (formerly First Nations) is Victoria, BC's Derek Janzen. He has been quietly recording and releasing homemade alternative music from out of his bedroom in the cold, dark north since 2008. Wand has played with some great acts, including Radical Face, Blackout Beach, Cousins, Jordan Klassen, and Himalayan Bear. When playing live, Wand incorpo... more info
Audio: There Is A Place
Submit info on this show to our admins