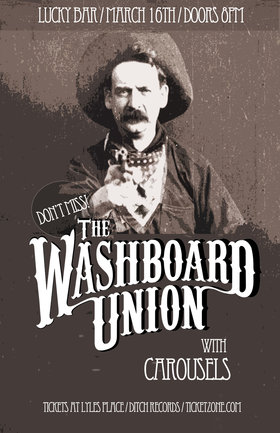 A 3 Car Pile up of Old Crow Medicine Show, Steve Earle, and Drive By Truckers. Canada's only 7 piece Outlaw Bluegrass Band. 4 vocalists/songwriters together for a one of a kind live show. The band was recently featured for 3 shows at Canadian Music Week and received multiple best of the fest nods.

In the fall of 2010 the band met one of Canada’s top producers, GGGarth Richardson. After hearing the band for the first time Gggarth decided that what the UNION was doing was so different from what he was used to that he signed on to produce The WASHBOARD UNION's album on the spot. Recorded at THE FARM studio in Gibson B.C. it would become Gggarth's first country album and the debut album for THE WASHBOARD UNION. Gggarth reached out to Bob Ezrin who produced the song Half Cree for the new album as well. With 4 distinct voices, The Washboard Union is a songwriting collective with one of the most captivating live shows on the road today.

THE WASHBOARD UNION's Self titled debut album will be out soon. Album mixed by John Whynot