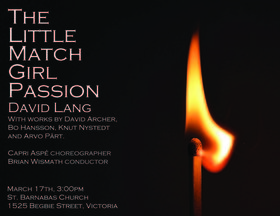 Awarded the Pulitzer Prize for Music in 2008, David Lang’s reflective musical setting is based on Hans Christian Andersen’s text. It tells the tragic story of a poor young girl, beaten by her father, who tries unsuccessfully to sell matches on the street, is ignored, and finally freezes to death. Lang's setting of this original story incorporates influences from various sources, including Bach’s St. Matthew Passion.

Vox Humana is thrilled to present the British Columbia premiere and second Canadian performance of this work, featuring dancers from Victoria’s ZarYevka Ballet, choreographed by Capri Aspé. Part of the St. Barnabas Chamber Music Series, additional works include Lighten Mine Eyes by Bo Hansson, Laudate by Knut Nystedt and the world premiere of commissioned work, Compassio, by Victoria’s own David Archer.

Since 2002, Vox Humana has established itself as Victoria’s premier chamber choir and an ensemble of great diversity and flexibility. Their repertoire covers every historical period and style, from the earliest polyphony to contemporary commissions. Highlights of their past performances include Handel’s Dixit Dominus with Victoria’s Galiano E... more info
Submit info on this show to our admins