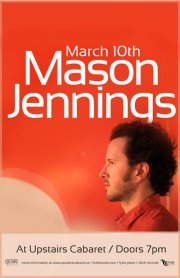 Tickets at : Lyle's Place, Ditch Records and online at http://tinyurl.com/b85kubm

As one grows into adulthood, remaining steadfastly single-minded about one’s pursuits gets increasingly difficult. The musician becomes a band mate navigating the creative energies of those around them. He becomes a boyfriend, a husband, a businessman. She becomes a lover, a mother, a practitioner of her art. Life becomes multifarious, and the pressure to not let the disparate threads of a chaotic life unravel can cause strain on any relationship. With his new album Minnesota, Mason Jennings crafts a collage of love trying to survive the transition into being a grown-up in a complex world.

“Love is the most important thing to me, my relationship with my wife and kids,” Mason says, adding “And music has always been as important as breathing to me. I have come to realize that to have it all, I have to take the long view when it comes to integrating all these parts of my life.” Increasingly, a sense of place and community has become important to him as well. “The album is called Minnesota because it’s a metaphor for an ever-changing landscape. More than any place I’ve ever been, things change so much here, even month-to-month. But even as things change, Minnesota is where my home is, where my center is.” His profession often takes him away from that center. Being on the road and finding the personal space to create while at home has caused him to examine how he balances his loves. He generally writes from an intensely personal point of view, but Minnesota represents a step toward the light after the darkness of Blood of Man, his last album.

A case in point is the first song on the album, “Bitter Heart,” which manages to be simultaneously plaintive and hopeful. The protagonist recognizes the breach of faith and the sense of estrangement in the relationship, but sings tenderly of rapprochement. To Mason, the central line in this song and a central point to the album is “Our world is filled with only what we see/Can we see love now.” Mason says, “I have come to the understanding that the way that we feel inside is the most important thing, and that we have a say in that.”
Mason often encounters couples after his shows who tell him his music played a major role when they were falling in love. “Raindrops On The Kitchen Floor” is an unadulterated love song, with that love being so visceral that it can seemingly transcend the possible (“How am I gonna live forever/Promise me you will/Call it off, the age of reason/There’s no more time to kill”). “I guess this is music to stay in love to,” he jokes.

But this collage is far from monochromatic. “Clutch” looks back wistfully at a love before the demands of adulthood came knocking. At the end of the song, Mason sings that “Maybe we could work it out, we could live in a dream, live in a dream,” as though he knows it’s too late to re-enter the honeymoon phase of the relationship. The song ends in a dream-like instrumental break that leads directly into “Witches’ Dream,” a fabulist romp that juxtaposes raw lust with fairy tale imagery. He stays in this dream state with “Rudy,” an allegory in which a good man overcomes the forces of darkness, while “Wake Up” addresses the need to put self-inflicted darkness behind one as well.
Musically, Mason paints from a more varied palette than ever. For instance, piano is featured more prominently than any of his previous albums. “The piano seemed to fit the emotional core of the album,” he explains. “I felt that it was important to begin and end the album with piano.” Mason played almost all of the instruments on the album, the one exception being “Well Of Love,” a Perez Prado-esque number that features his friends in The Living Room, the side project of Jack Johnson
drummer/percussionist Adam Topol. Friend Jason Schwartzman adds additional piano and background vocals on “Raindrops.”