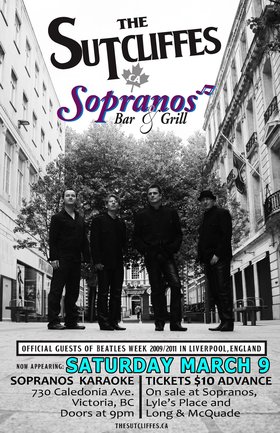 Music: Open Mic / Jam / Karaoke, Pop / Rock / Indie, Tribute / Cover
oin us for the Great Big Sea Pre Party with Great Big Sea on the BIG screens and get free entry to the after party!

Get in half price with your Great Big Sea ticket.

The Beatles: from Hamburg to the Cavern and BBC studios- the songs they wrote, the songs they covered and the songs they loved... the way they played 'em- with fire and sweat. Oh, and guitars. They had guitars, too. more info
Submit info on this show to our admins