With Nothing Is Heavy visual art show!

WHITE LUNG
----------------------
White Lung are known for their furious yet melodic approach to punk. Since adding guitarist Kenneth William in 2009, Mish Way (vocals), Anne-Marie Vassiliou (drums) and Grady Mackintosh (bass) have received nothing but critical acclaim for their distinct brand of punk and their tight, live stage shows. White Lung’s debut LP It’s The Evil (Deranged Records) was Exclaim’s Punk Album Of The Year in 2010 and the band was nominated for Punk/Hardcore Artist/Group of the Year at the 2011 Canadian Music Week Indie Awards.

Their second LP Sorry (Deranged Records) was released spring 2012 and pushed the band to a wider audience, receiving critical acclaim from SPIN, Pitchfork, Bitch, E! Music. Sorry landed on “Top Albums of the Year” lists Exclaim!, Magnet, amongst others while Rolling Stone marked Sorry in their “Top 10 Albums Of The Year”. Sorry was also nominated as “Best Album Art of 2012″ by NME and made the shortlist for “Best Album Art” by Art Vinyl in London. A vinyl exhibit was held worldwide from Japan to Britain to Sweden. The band has toured through out North America extensively and went through Europe and the UK Fall of 2012.
http://whitelung.bandcamp.com/
http://whitelung.ca/
http://enableragency.com/site/publicity/artists/white-lung/
https://www.facebook.com/whitelung
http://whitelung.tumblr.com/


NÜ SENSAE
--------------------
Nü Sensae has taken big risks with even bigger payoffs on this release. Proving just how unpredictable they can be, they abandoned their status as a duo — a favourite angle of both the media and fans — and recruited Vancouver noise rock great Brody McKnight as a full-time member. Previously working with the now-legendary group Mutators, McKnight has added another dimension of heaviness to the band’s already mind-melting sludge attack.

They’ve also embraced diversity in other ways, allowing more loud-quiet dynamics into their songwriting. From the creeping dirge of “Tea Swamp Park” to the vast expanse of “Say What You Are,” the quiet sections offer brief moments of uneasy solace between the full out attack of songs like “100 Shades,” “Tyjna” and “Eat Your Mind.” Elsewhere, subtle but defined melodies surface amidst the fuzz of tracks like “Burnt Masks” and “Dust.” Don’t be mistaken, though: Sundowning is designed to bludgeon with the raw aggression that can only come from the best elements of noise, punk and grunge.
https://www.facebook.com/nusensae
http://www.myspace.com/nusensae
http://nusensae.tumblr.com/
http://vimeo.com/24629180

The High Drops are a rocking socking quartet riding bikes through Vancouver's green ways while developing continual experimental rock and roll sets. They are all friends and have nearly all lived together at Alexi and Jen's place on 12th avenue.
Find them now on cassette with Green Burrito or their 10 inch with Under the Gun or their 7” with Bummer High.
http://www.myspace.com/thehighdrops
http://www.facebook.com/pages/The-High-Drops/123482274398445
http://thehighdrops.bandcamp.com/
http://discorder.ca/discorder-magazine/index.php/2011/10/02/the-high-drops/


Beer, DJs between bands, art on the walls, you know the drill..
let's do this. keep it punkxx


Partial Proceeds from this event will go to the P.H.S. Youth Housing First Project.
The objective of the program is to remove barriers for housing and house the youth most marginalized through trauma, mental illness and addiction in Vancouver. Any donations towards this program funds community programming and low threshold employment opportunity for the young people we house and those who are currently homeless.
This manifests in food and stipends for a youth community kitchen we run weekly, employing 10 people, a youth magazine, which pays the young people directly out of profits, and also socks, soap and other hygiene basics for homeless youth.

Punk from Vancouver BC
Unknown

Punk from Vancouver BC
Unknown

Punk Rock from Vancouver BC
Unknown

We put out records and CDs for friends in Black Mountain, Destroyer, Thor, Bugsk...
Vancouver BC
Open / Operational 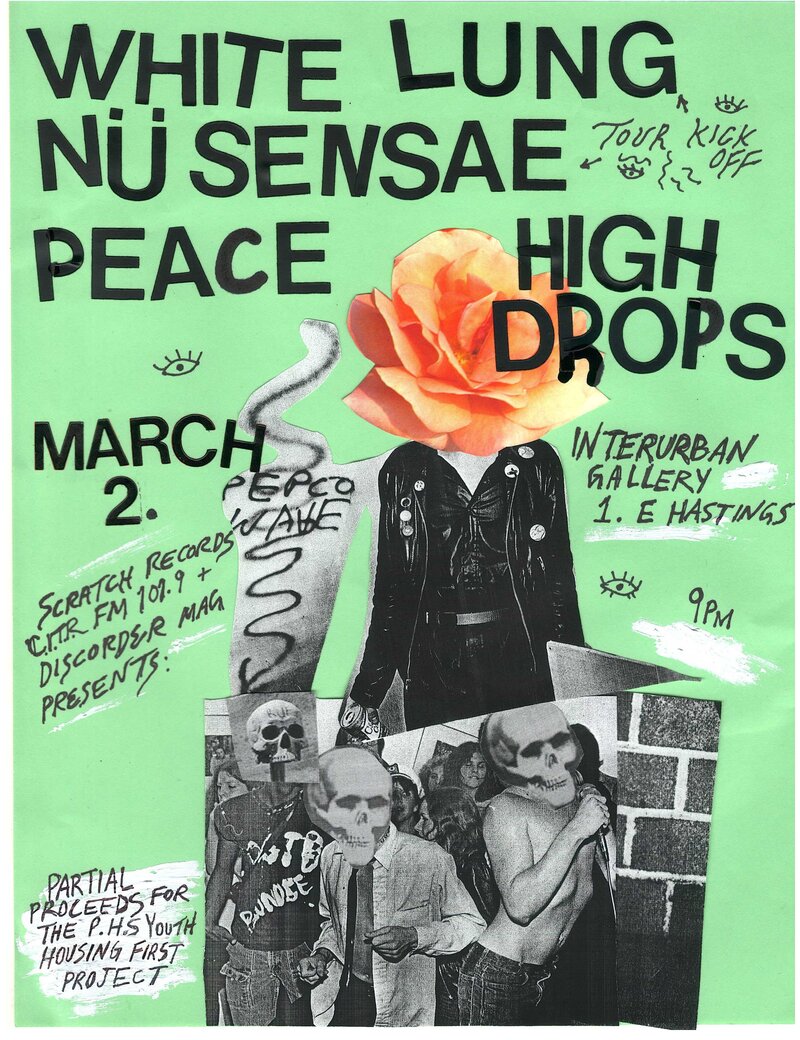