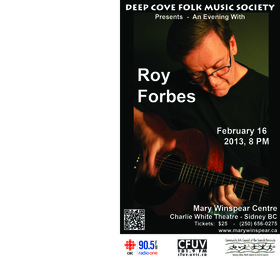 Music: Folk / Celtic / Latin / World, Jazz / Blues
Roy Forbes
Born in Dawson Creek, B.C. and nicknamed Bim as a child, Roy Forbes has been a strong presence on the Canadian music scene since the early 70s as a performer, songwriter, recording artist, record producer, and broadcaster. It might be on the CBC or across a festival meadow, but you’ll always recognize the unique, intense guitar playing and the high soulful singing of Roy Forbes. He has absorbed all of his influences and developed into a totally original, dynamic, exciting performer of deeply resonant lyrics. Roy started making up songs in 1967, after receiving his first guitar. From the 1975 release of his first album, Kid Full Of Dreams, Roy has been regarded as one of Canada’s finest songwriters. This two-time Juno nominee and multi West Coast Music Award winner has nine solo albums to his credit as well as two CDs with UHF (Ulrich Henderson and Forbes) and a Christmas album with Connie Kaldor. Roy has not only had success singing his own songs – they’ve also been performed and recorded by a myriad of other performers and have been used as 'source music' for movies and television. He is also a producer of other artists, contributes regularly to CBC Radio One with the occasional but popular Snap Crackle Pop and is now hosting a weekly radio show on CKUA – Roy’s Record Room – heard every Monday evening. His latest album, Some Tunes For That Mother of Mine, pays tribute to the songs he grew up hearing in his snowy Dawson Creek hometown in northern British Columbia. After forty years, Roy Forbes remains one of Canada’s favourite and best-loved acoustic artists. http://www.royforbes.ca

One July morning in 1971, a British Columbia kid full of dreams named Roy Forbes caught a ride down the Hart Highway from his native Dawson Creek to Vancouver. Thirty years later he and a lot of loyal fans shake their heads to think how far a battered �63 Studebaker can actually carry a good northern boy and his suitcase full of tunes. Five m... more info
Submit info on this show to our admins