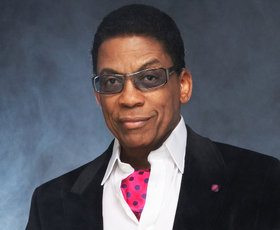 Music: Funk / R&B, Jazz / Blues
Herbie Hancock is a true icon of modern music. Throughout his explorations, he has transcended limitations and genres while maintaining his unmistakable voice. In addition to being recognized as a legendary pianist and composer, Herbie Hancock has been an integral part of every jazz movement since the 1960s.

Hancock has received an Academy Award (1986) for his Round Midnight film score and 14 Grammy Awards, including Album Of The Year in 2008 for "River: The Joni Letters" and two 2011 Grammy Awards for his globally collaborative CD, "The Imagine Project." Many of his compositions, including “Canteloupe Island,” “Maiden Voyage,” “Watermelon Man,” and “Chameleon,” are modern standards that have had a profound effect on all styles of modern music.