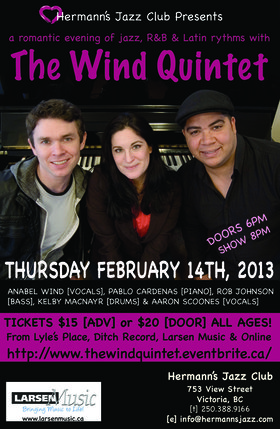 Anabel's romance with singing began when she was merely 9 years old. Trained to sing opera by Soprano Raaya Shapira, she was given the gift of touching others with her unique voice. Later on, she was coached by Soprano Robin Weisel-Capsuto,and Jazz pianist Naum Perfekovitch, studied in Boston at the Berklee College of Music and holds B.Mus (JAMD) and Masters' of Education (Uvic) degrees. Her singing is extremely versatile, and with over 15 years of training, her voice allows her to sing in any given key, or style. She moves freely between using classical and Contemporary vocal techniques, and brings oriental and neu-soul warmth, and depth to each song. Anabel is deeply influenced by Jazz legends like Ella Fitzgerald, Sarah Vaughen, Dee Dee Bridgwater, Kurt Elling and other songbirds such as Alicia Keys, India Arie, Donny Hatheway, and Brian McKnight.

While Anabel was featured in many musical productions, and orchestras in Canada and abroad, she chose to share her vast vocal knowledge and teaching expertise with aspiring singers and actors, and is currently trainning the next generation of singing excellence in Victoria. Anabel is also the new School Director at Larsen School of Music and is thrilled to have gathered this group of all-star musicians, to present you with an evening that is all love, relationships and incredibly fun music.

Scoones is an award-winning, refreshing young vocalist who studied in Victoria with Louise Rose and in Boston at the Berklee College of Music. He draws his inspiration from singers like Kurt Elling and Bobby McFerrin as well as Tony Bennett and Harry Connick Jr. Local musicians like Ron Hadley and Daniel Lapp have often featured Scoones in their s... more info
Submit info on this show to our admins