Catch the holiday spirit as Tidings brings together Christmas favourites with so...

Catch the holiday spirit as Tidings brings together Christmas favourites with songs from the year-round canon. Share a night of music that’s uniquely fun and passionate, just like the artist bringing her voice, guitar and piano to the stage, Allison Crowe.

Hear what folks are saying:

“The third time was the charm for Newfoundland-based, B.C.-born singer-songwriter Allison Crowe. After film director Zack Snyder tried to get one of Crowe's songs into the 2009 film ‘Watchmen’ and again in 2011 with ‘Sucker Punch,’ he finally succeeded this year. The film is the summer blockbuster ‘Man Of Steel’ and features Crowe in a cameo role .” ~ Jason MacNeil, Huffington Post

"After a surprise cameo in the summer blockbuster movie Man of Steel and the release of her exquisite traditional folk covers album, ‘Newfoundland Vinyl’, Allison quickly rushed back into the studio to write, record, engineer, produce and create the cover art for her upcoming album, ‘Heavy Graces’... it seems our favorite independent singer-songwriter is more determined than ever to forge her own path. I predict we’ll be seeing Allison Crowe not once but twice on our best of the year list." ~ Victoria McCabe, Muruch

"Allison Crowe is a stunningly talented performer. Her voice celebrates the music with a bluesy rock-gospel intensity; her controlled vibrato, silken rasp, and powerful projection rivet your attention. This is no casual background music... be prepared to be amazed." ~ Carol Swanson, ChristmasReviews.com

“Amidst her long list of accomplishments - you can add Big Screen Star. Just this past summer Allison Crowe took on the familiar role of a singer in Zack Snyder's Superman blockbuster MAN OF STEEL (2013). Allison's cameo has her performing the Johnny Cash classic ‘Ring of Fire’." ~ Stephanie Beaumont, Sea and Be Scene

"Allison Crowe's voice is as much a manifestation of Christmas spirit today as Bing Crosby's was in 1942. It's as warm as an open fire; as gorgeous as snow-frosted evergreens; as tender as that hug you give your mother on Christmas day." ~ Stephen Smysnuik, The Pique

Joshua is 15 years old, and attends Woodlands Secondary, where he studies and plays music in the program directed by WSS Band Master Rick Becker. He has been singing before audiences for two years. He began by singing in a local talent show. Soon after, he had his first singing role in a musical as The Scarecrow in Headliners' Production of The Wiz. Since then, he has been involved with Headliners productions of Hairspray, High School Musical, Alice in Wonderland, Legally Blonde, and most recently, he played Billy Flynn in Chicago the Musical, and Luke in The Digital Beyond. In August 2013 he took home 3rd place in the Island-wide VIEX Songbird Competition. Over time he's trained under a few different teachers for voice and piano, including Tamara Lea, Bill Perison, and Nico Rhodes.

Chelsea is the official accompanist of the Andrea Bertram Studio. She has trained as a collaborative pianist and is a veteran of many music festivals, concerts, cabarets, dinner theatres and Allison Crowe "Tidings" concerts. She also teaches piano and accompanies the AVIVA women's choir. The Studio would like to take this opportunity to recognize how much Andrea and all the students appreciate Chelsea’s expertise, dedication and support. We could not do this without her!!!!

Daniel is 14 years old and attends Nanaimo and District Secondary School. A true triple-threat performer, Daniel has studied acting, dance and voice. He has performed in Red Room productions of Aesop's Fables, Cats, Charlie and the Chocolate Factory, High School Musical and Aristocats. He was in the Bard to Broadway 2009 production of "Oliver". He has 9 years study in Tap, Ballet, Jazz, and Hip Hop dance at Tempo Dance Academy, performing in "The Grinch" and "It's a Charlie Brown Christmas" at the Port Theatre. Daniel also performs in the vocal section of the Upper Island Musical Festival with the guidance of vocal teacher Andrea Bertram, receiving many certificates and honing his vocal skills for dinner theatre and cabarets. He danced last evening in the Tempo Dance Academy production of "The Grinch". Daniel’s very excited to be performing at the Allison Crowe "Tidings" concert for the second time.

Melissa Kahan is 17 years old and in her last year at Dover Bay Secondary school. This is her first time performing at an Allison Crowe Concert and she is thrilled! Melissa recently won the Minetown Days' Lanztville's Got Talent in the summer and is currently working on Guys and Dolls as Adelaide with Bay Theatrix. Melissa has been in many other roles including ensemble in Sweeney Todd with Shmooze Productions, Elle Woods in Arts Alive's production of Legally Blonde the Musical, Molly in Annie, and Anita in West Side Story with Dover Bay Theatrix. She looks forward to pursuing a career in musical theatre.

Taylor Johnstone is 17 years old and currently in grade 12 at Dover Bay Secondary School. A triple-threat, Taylor trains as an actor, a dancer in classical and urban styles, and as a singer. This past year he participated in the Upper Island Music Festival to much acclaim. This past Summer, he played the role of Emmett Forrest in ArtsAlive Senior Musical Theatre's "Legally Blonde: The Musical". After only one year's instruction with the Andrea Bertram Studio, Taylor is delighted to participate in the Allison Crowe "Tidings" Concert.

Raymond is 15 years old and attends Nanaimo and District Secondary School. He is a veteran of competitions, festivals and concerts. He was chosen to sing at the Upper Island Musical Festival's Honours Performance in April 2012 and 2013. He is a winner of "Pinoy's Got Talent" and was selected by the adjudicator as the Junior Musical Theatre representative from the Upper Island Musical Festival to the Performing Arts BC Provincial Finals in Nanaimo in May 2012. In May 2013, Raymond was the Classical Representative to The Provincial Finals in Chilliwack where he was Runner Up in Vocal Variety. He performed at the JDRF (Juvenile Diabetes Research Foundation) Gala November 2nd at Tigh na Mara in Parksville. He is undertaking the role of "Benny" in the NDSS production of "Rent" in January 2014. Raymond has performed at the Allison Crowe "Tidings" Concert for the past two seasons and is thrilled to have the opportunity again this evening.

Peace on Earth ~ goodwill toward all. 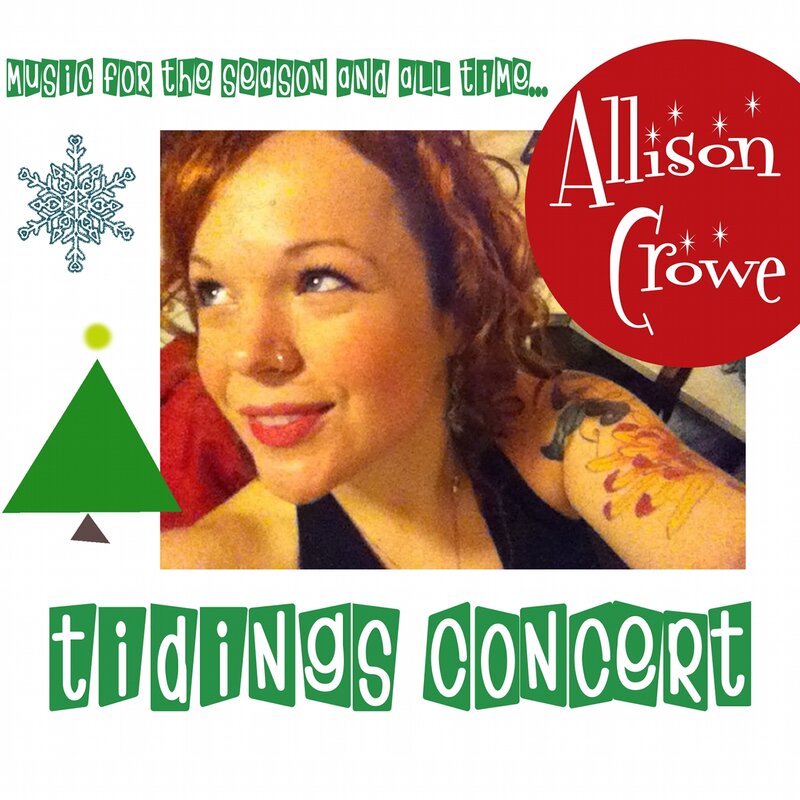