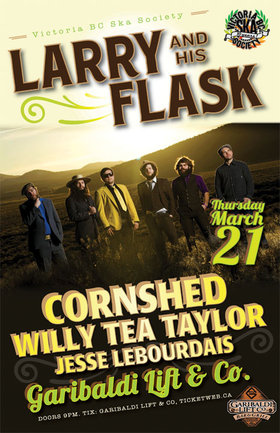 Music: Country / Bluegrass / Rockabilly, Folk / Celtic / Latin / World, Jazz / Blues, Punk / Metal / Hardcore
We are sad to inform all LARRY AND HIS FLASK fans across Canada (especially those that were excited to attend the shows we were set to host at Garibaldi Lift Co (GLC) - Whistler on March 21st and at Swans Nightclub in Victoria on March 23rd that their whole Canadian tour has been cancelled due to border problems. Although the band has crossed the Canadian border successfully 12 previous times, when they tried to cross in Osoyoos a couple of nights ago they were turned away. The band then tried to cross again the following morning and were denied entry a second time. Then today even with the aid of a lawyer they tried to cross a third time and were denied. We are sorry at any inconveniences they may have caused and we are very disappointed since we were really looking forwards to the shows.

Refunds will be available at point of purchase for both shows. Those that purchased on ticketweb.ca for both shows will also get refunds. Again our deepest apologies... :( We hope this problem gets fixed so The Flask can come back to our parts again in the near future and bring us their sweet music.

Larry And His Flask (Fucker Rock and Roll!)

Musical anthropologists interested in the study of just how fast a band can evolve need look no further than the six upright, upstanding men in Oregon’s Larry and His Flask. Formed by brothers Jamin and Jesse Marshall in 2003, the Flask (as the band’s expanding army of fans calls them) spent its first half-decade stuck in a primordial, punk-roc... more info
Audio: Call it What You Will, Manifest Destiny, Beggars Will Ride

other sites: cbc | tumblr
With the heart of a small town and the fire of the Vancouver punk rock scene, Jesse LeBourdais has spent the last 3 years putting rubber to pavement touring and playing bars, basements and everything in between across Canada with little more than a guitar and his voice. Steeped in the folk tradition of musical story-telling and fuelled by the raw ... more info
Audio: He's Coming To Us Dead, Fool Of Myself
Submit info on this show to our admins