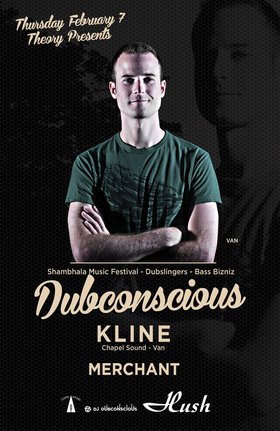 Dubconscious has come to represent both the east and the western coast of Canada. Born in Toronto & raised on the jungle & drum’n’bass sounds permeating the city in the late 90s & early 2000s, he developed a taste for hard beats drenched in reggae vibes. 2004 brought a big move across the country to the city of Victoria, which was nurturing a fledgling breaks & jungle scene – by the end of his first year of University, he had bought his first set of Technics and the seed was planted. Bouncing back & forth between TO & Vic for the next 3 years of school presented plenty of chances to play to different music to new crowds, adding reggae & dancehall to the repertoire, as well dubstep – in its infancy at this point. After school the move was made back east, joining up with the Dubslingers crew in Toronto, who are still holding down Canada’s longest running dubstep weekly - Dubslingers Wednesdays at Thymeless.
After having established a name for himself in Toronto’s competitive scene, he headed west once more, this time settling in Nelson, BC. After spending two productive years in the area immersing himself in both the great outdoors & the underground party scene, he's moved on further west to Vancouver, where he continues to DJ all across the board - dropping sets jam packed with a mash of many forms of urban & modern bass music at a wide array of events & venues across the city, the province, and the country on a regular basis. He's also been spending time locked down in the studio, slowly getting his production game together..
Dubconscious has appeared in nearly every major city in Canada, sharing the stage with the likes of The Roots, Andy C, Salva, Mixmaster Mike, Shy FX & Skibadee, Clicks & Whistles, Rusko, Dillinja, Plastician, Mimosa, DJ NuMark, the Glitch Mob & An-Ten-Nae (just to name a few) and has appeared at numerous music festivals including BC's Shambhala, Bass Coast, Diversity, Loki Festivals, WEMF & Harvest Festival in Ontario, and the Dragon Festival in Granada, Spain.

Kline is a promising young act representing Western Canada - having moved to Vancouver from Calgary, Kline has already established himself has a producer/dj to keep your ears out for. One of his many accomplishments is having his “Late Night” tune played by Skream & Benga on their BBC Radio 1 show, a track you can download for free below. Kline is also a part of Chapel Sound, which is a collective of creative minds with the common goal to push the boundaries of art and music without prejudice. Sharing that goal, Kline's unique productions deliver an atmospheric subtlety with pulsating rhythms guaranteed to get your head nodding & your feet moving.