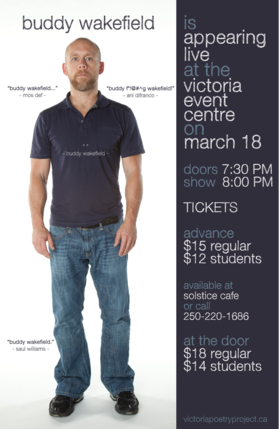 “Bobby was it?” –Tilda Swinton

“Buddy Wakefield is an unbullshit artist… and he’ll make you laugh your ass off while he does it.” -Gabrielle Bouliane

This is kind of a big deal. Hope you didn't make any other plans.

You are advised to show up early.

BUDDY WAKEFIELD is the two-time Individual World Poetry Slam Champion featured on NPR, the BBC, HBO’s Def Poetry Jam, and most recently signed to Ani DiFranco’s Righteous Babe Records. In 2004 he won the Individual World Poetry Slam Finals thanks to the support of anthropologist and producer Norman Lear then successfully defended that title at the International Poetry Festival in Rotterdam, Netherlands against the national champions of seven European countries with works translated into Dutch.

In 2005 he won the Individual World Poetry Slam Championship again and has gone on to share the stage with nearly every notable performance poet in the world in hundreds of venues internationally from The Great Lawn in Central Park and Scotland’s Oran Mor to San Quentin State Penitentiary, House of Blues New Orleans and First Avenue.

In the spring of 2001 Buddy left his position as the executive assistant at a biomedical firm in Gig Harbor, WA, sold or gave away everything he owned, moved to the small town of Honda Civic and set out to live for a living, touring North American poetry venues through 2003. He still tours full time and considers annual Revival tours with Derrick Brown and Anis Mojgani, as well as separate tours with Ani DiFranco, to be the highlight of his career thus far.

Born in Shreveport, LA, mostly raised in Baytown, TX, now claiming Seattle, WA as home, Buddy has been a busker in Amsterdam, a lumberjack in Norway, a street vendor in Spain, a team leader in Singapore, a re-delivery boy, a candy maker, a street sweeper, a bartender, a maid, a construction worker, a bull rider, a triathlete and a sucker for anything unfolding. Loves peanut butter. And hygiene. Wakefield is a writer, the elated son of a guitar repair woman, wingman of Giant Saint Everything, and remembers Kirkwood, NY. Sanborn too.

Buddy, a Board of Directors member with Youth Speaks Seattle, is honored to be published internationally in dozens of books with work used to win multiple national collegiate debate and forensics competitions. An author of Write Bloody Publishing, Wakefield is known for delivering raw, rounded, high vibration performances of humor and heart.

In the Fall of 1984 Anchor Bay Entertainment released a movie called Children of the Corn while Buddy lived in front of the corn fields near Niagara Falls, NY. This traumatic event (coupled with extensive exposure to Kenny Rogers and Lionel Richie) may or may not have led to Buddy becoming a sensitive poet puss who plays marbles in the trees, listens by talking, and keeps fingers on pulse. HI MOM!