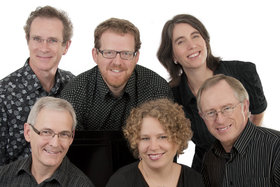 Music: Classical, Jazz / Blues
Hexaphone, Victoria’s six-member a cappella ensemble, presents “Byrds and B’s”, a concert inspired by Valentine’s Day and devoted to composers whose names begin with the letter “B”. There will be motets of William Byrd, partsongs of Johannes Brahms, a wonderful English story set by Benjamin Britten, and light-hearted songs of William Billings, Dave Brubeck and Irving Berlin. Hexaphone won the Elmer Iseler Prize for the Best Performance of a Canadian Composition and enjoyed enthusiastic audiences this past summer at the Kathaumixw International Choral Festival in Powell River. Come and listen to Hexaphone’s version of the “Byrds and B’s”.

Hexaphone is Carolyn Howe (soprano), Hannah Mitchell (alto), John Doughty (tenor), Ian Bullen (tenor), Nicholas Fairbank (baritone), and Paul Boughen (bass). Now in its tenth season, the group was formed in 2002 with the goal of performing diverse styles of vocal music, one voice to a part. Hexaphone has become a highlight of Victoria's choral scen... more info
Submit info on this show to our admins