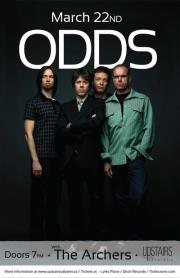 Odds
https://www.facebook.com/oddsofficial/info
In 1987, four highly individual Vancouver musicians put together a guitar-based, power pop strike force to write catchy melodic songs built on crunchy rock guitars, full-voiced harmonies and walloping drums. Original members Doug Elliott, Craig Northey, Steven Drake and Paul Brennan worked the bar circuit and honed their sound. After a long, hard slog at some flea-bitten dive bar gig, they found themselves asking the musical question: “What are the odds of us ever escaping bullshit gigs like this?” That weekend they became simply, Odds, and proceeded to do what a lot of frustrated Canadian acts had done before them: they headed to L.A. and got a major label deal. Shortly after the release of their self-produced debut, Neopolitan (Zoo Entertainment 1991), they were recruited to back up Warren Zevon on his Mr. Bad Example tour. They channeled this master class into their next recorded work, Bedbugs (Zoo 1993), and raised their profile further when their comedian pals, Kids In The Hall, appeared in their video for the irony-laced single “Heterosexual Man.” After Paul Brennan’s departure in 1995, Doug Elliott invited his longtime friend (and former Bryan Adams drummer) Pat Steward into the band, resulting in a weightier wallop and groovier groove for their next release, the platinum-plus selling Good Weird Feeling (Warner Music 1995), which featured the hits “Truth Untold” and “Eat My Brain.” After their involvement in the Kids In The Hall’s feature film, Brain Candy, for which Northey composed the original score, the band released their final album as Odds. Nest (Warner Music, 1996) yielded the chart-topper, “Someone Who’s Cool,” (which enjoyed 8 weeks as the number 1 song at Canadian rock radio and went Top 40 in the U.S) and the hit single “Make You Mad.”

In 2007, the original Odds members were busy as bees, cranking out more music than in their life as the Odds, Northey, Elliott and Steward collaborated on projects by Strippers Union with Rob Baker of the Tragically Hip, Northey Valenzuela with Jesse Valenzuela of the Gin Blossoms, Northey’s solo album Giddy Up, several Colin James albums, session work for Jeremy Fisher, Matthew Good, Payolas, two feature film scores (Kids in the Hall in Brain Candy, Dog Park with Luke Wilson) and the themes for CTV’s hit Corner Gas.
It’s obvious that although they had been on a “walkabout” from Odds, the core unit — Steward, Elliott and Northey — never really “split up.” It is this nucleus, along with new guitarist Murray Atkinson, which forms (and informs) the Odds on their album Cheerleader.

“The Archers, or if Mumford and Sons had sons: With influences drawn from the softer side of the rock spectrum, The Archers merry brand of music brings together warm harmonies, direct lyrics and pointed guitars. If the groups' aim with "The Sun Will Rise" was to create winning whimsical folk-pop, then The Archers have hit their target.” - Steve Venegas CBC Radio 3 - Jun 11, 2012

The Archers, who were recently nominated for a “Young Performer of the Year Award” by the 2012 Canadian Folk Music Awards, have previously been crowned Youthink’s “BC's Best Teen Band” in April 2011 and Victoria’s “Garage Band Live” winners in May 2011. They produced their own EP, "Much More Than Merry Men", in August 2011, and discovered it had national appeal on CBC Radio 1. The album has since been added into rotation on CBC Radio3 and the band was Victoria’s Zone 91.3FM’s Band of the Month in June 2012. They have played Main stage at Victoria’s Canada Day, Side Stage at Rifflandia Festival, Fringe Festival, Kulth Festival, TedX Youth Conference, and opened for Hey Ocean, Jon and Roy (Vancouver CD release with Ryan Guldemond), Steven Page, John Mann, Frazey Ford Grand Analog, Wake Owl, Kim Churchill and Rococode. They are just back from their second tour of BC/AB, planning their next tour out to Montreal in May/June 2013 and can hardly wait to get into the studio in March to record their debut full length album.

The Odds brought you "Someone Who's Cool," "It Falls Apart," "Eat My Brain," "Heterosexual Man," "Make You Mad," "Satisfied," "Truth Untold," "Nothing Beautiful," "Mercy To Go," "Jackhammer," etc. Go to oddsmusic.com for videos and all that other stuff! more info

other sites: thearchersband
“The Archers, or if Mumford and Sons had sons: With influences drawn from the softer side of the rock spectrum, The Archers merry brand of music brings together warm harmonies, direct lyrics and pointed guitars. If the groups' aim with "The Sun Will Rise" was to create winning whimsical folk-pop, then The Archers have hit their target.” - Steve... more info
Submit info on this show to our admins